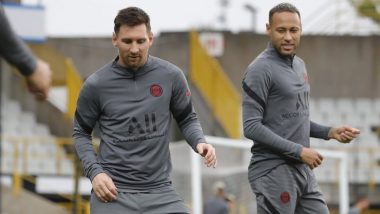 Lionel Messi who shifted to PSG a bit more than a month ago is still looking out for his first goal with his new employers. The kind of updates that are coming for PSG camp just makes us come to a conclusion that Messi's new employers and fans will have to wait a bit more for his first goal. After being ruled out from the match against Metz, The Argentine will also miss the clash against Montpellier. PSG coach Mauricio Pochettino confirmed the news at the press conference ahead of the game. Lionel Messi Injury Update: Argentine Reportedly Unavailable for UCL 2021-22 Match Against Manchester City.

Lionel Messi's PSG will play against Montpellier on Seotember 26, 2021. Even the official account of PSG confirmed the news and posted a message on social media. "Leo Messi started running again today in line with his treatment protocol. An update check is scheduled for Sunday," wrote PSG in a statement on Friday. As one may recall. Lionel Messi had suffered from a knee injury during the match against Lyon and was subbed. Messi's team had won the match 2-1 back then.

Here's the video where the PSG coach talking about Messi's injury:

▪️ The fitness of Leo Messi

▪️ The role of @MauroIcardi pic.twitter.com/7RIrcLnkgk

Lionel Messi could also be ruled out for the Champions League 2021 match against Manchester City which is scheduled to take place on September 29, 2021. Needless to say that the fans are quite heartbroken with the update of Messi being injured.

(The above story first appeared on LatestLY on Sep 25, 2021 04:37 PM IST. For more news and updates on politics, world, sports, entertainment and lifestyle, log on to our website latestly.com).