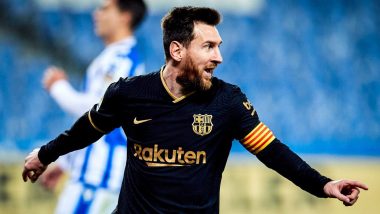 Lionel Messi might have won the Copa del Rey 2021 trophy, but he still sad about the El Clasico loss that they suffered a few days ago against Real Madrid. After winning the match against Athletico Bilbao, the Barcelona captain spoke about how happy he was for getting to a better position in La Liga 2021, but he still labels the El Clasico loss as 'bad'. This just means he is still rueing about the loss against Real Madrid. He also was sad that the team could not celebrate their win with the fans because the match was played indoors owing to the COVID-19 restrictions. Barcelona went on to defeat Bilboa by 4-0 at Camp Nou. Lionel Messi Scores 2 Goals, Barcelona Beats Athletic Bilbao 4-0 to Win Copa Del Rey 2021.

While talking about La Liga, he explained that the league was a little difficult, but with the new combination of players and youngsters. In the same sentence, he lauded the players for getting strong over time. "Recently we became stronger in La Liga and we managed to reduce the difference with Atlético, but the bad thing is the Clasico that we have lost," he said about the El Clasico loss. Lionel Messi Reacts After His Brace Against Athletic Bilbao Takes Barcelona to Copa del Rey 2020–21 Title (View Post).

He labelled Barcelona as the club of his life and said it was an honour to captain the side. During the Copa del Rey Final 2021, Lionel Messi had scored a couple of goals and led the team to a stunning win.

(The above story first appeared on LatestLY on Apr 18, 2021 04:19 PM IST. For more news and updates on politics, world, sports, entertainment and lifestyle, log on to our website latestly.com).