Liverpool ‘Disappointed’ With Crowds Gathering Outside Anfield Despite Police Warnings 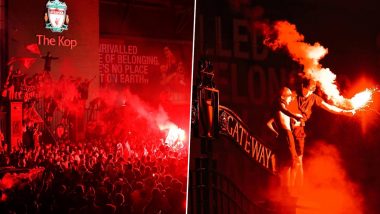 London, July 23: Premier League champions Liverpool said that they were disappointed with fans of the club celebrating outside Anfield after they lifted the league trophy for the first time.

Liverpool, who were crowned champions last month with a record seven games to spare, lifted the trophy on Wednesday night after beating Chelsea 5-3 in what was their last home game of the season. Liverpool Fans Gather Outside Anfield in Large Numbers to Celebrate EPL 2019–20 Title Lift.

The club and city officials had appealed to fans to not gather outside Anfield or in any part of the city, as they had done when the club's title win was confirmed last month, in line with the social distancing guidelines due to the coronavirus pandemic. However large crowds did gather outside the stadium on Wednesday night.

"Liverpool Football Club would like to thank those supporters who stayed at home to celebrate the team lifting the trophy last night, protecting their loved ones and our city from the ever-present threat of this pandemic. We are, however, disappointed with the scenes outside Anfield last night and that more supporters did not heed the celebrate at home advice," said the club in a statement on Thursday. Liverpool FC Lift EPL 2019-20 Trophy at Anfield Shining Bright With Fireworks! View Pics & Videos of Jürgen Klopp, Mohamed Salah, Team Liverpool & The Reds Fans Celebrate the Historic Win in 30 Years.

"The club and our city partners Merseyside Police, Liverpool City Council and Spirit of Shankly, have worked in-step for the past eight weeks to consistently encourage fans to support the team from home and we would like to thank them for their continued support and collaboration in the lead-up and throughout football returning behind closed doors."

(The above story first appeared on LatestLY on Jul 23, 2020 09:44 PM IST. For more news and updates on politics, world, sports, entertainment and lifestyle, log on to our website latestly.com).