Pep Guardiola has 'never' felt like an underdog and insists even a daunting trip to face Liverpool at Anfield on Sunday will not alter his belief in his Manchester City side. Guardiola takes City into Sunday's clash with everything seemingly in favour of the home side. 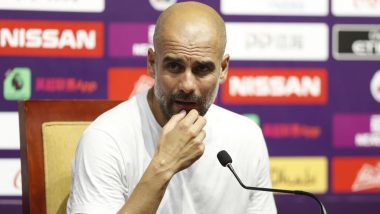 Manchester, November 10: Pep Guardiola has "never" felt like an underdog and insists even a daunting trip to face Liverpool at Anfield on Sunday will not alter his belief in his Manchester City side. Guardiola takes City into Sunday's clash with everything seemingly in favour of the home side.

The European champions have a six-point advantage at the top of the Premier League and have lost only one –- a 2-1 defeat by City back in January -- of their last 50 league games. Guardiola must also do without goalkeeper Ederson for the match at Anfield, with the Brazilian having picked up a muscle injury in the midweek draw away to Atalanta in the Champions League, to add to the losses of Aymeric Laporte, Oleksandr Zinchenko and Rodri to injuries.

But the City manager still believes that his players can achieve only their second win at Liverpool's ground in the last 38 years. Guardiola, who has won 28 trophies in his career as a manager at City, Barcelona and Bayern Munich, said: "What does it mean to be an outsider?  Pep Guardiola Urges Manchester City's Kyle Walker to Prove Gareth Southgate Wrong After England Manager Leaves Right-Back Out of Euro Qualifiers Squad .

"People say 'you're an outsider or not, an underdog or not'. But I've never gone into a game feeling like an outsider and feeling like I'm not going to win. I never felt that. "Of course, they are in a position six points ahead, they are playing fantastic all season and we have many problems in some departments.

"But I'm not going to take the bus to Anfield thinking I'm going to lose the game. That has never happened in my career. "I always had the feeling that if we do the special things we plan to do, we will have our chance to win."

City have already suffered two shock losses in the league this season to Norwich and at home to Wolves to leave themselves playing catch-up to Jurgen Klopp's team with only 11 games gone.

'We Need Our Best'

And Guardiola knows it will take one of the best displays from his time at City to inflict a first home defeat in the league on Liverpool since April 2017.

"We know we need our best performance," he says. "To win this kind of game, you have to be at the top level, definitely. We can't be half and half. "The way they play, they demand incredible attention in the all the details for 95 minutes. We know that. "But that is the point. I'm pretty sure that if there's a chance to win at Anfield, it's when you believe you're going to win the game. "If you think, 'Let's just see what happens', against that team there, I think it is not possible."

Guardiola has lost three and drawn only one of his four visits to Anfield during his time in charge at City. The Sky Blues' last victory there came courtesy of two goals from former France international Nicolas Anelka in May 2003. Club greats like David Silva and Sergio Aguero have never won there, and the Argentine -– City's all-time leading goalscorer -– has never even scored there.

"I cannot explain it," says Guardiola. "I can only explain the period when I was here. "I would try to tell the players what they have to do and focus on what we have to do to win the game in mental approach and tactical decisions. "I don't believe much in statistics but 38 years for one time means how difficult it is at Anfield."

(The above story first appeared on LatestLY on Nov 10, 2019 04:29 PM IST. For more news and updates on politics, world, sports, entertainment and lifestyle, log on to our website latestly.com).