City have played 12 games in that period and lost three – all of them coming away from home. At the Etihad though, they have been on a scoring streak. They are on a winning run of seven games at home and have scored 26 goals in those games while conceding only once. Five of those seven matches, City have won by a minimum margin of three goals. 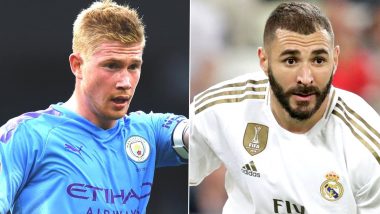 Real Madrid will aim to overturn a 1-2 deficit when they visit Manchester City for the second leg of their UEFA Champions League 2019-20 last 16 clash at the Etihad on Friday. Madrid fell behind to goals from Gabriel Jesus and Kevin de Bruyne in the first leg at home after going ahead through Isco. They return to the Etihad as champions of Spain while City have just surrendered their Premier League title to Liverpool. Zinedine Zidane’s men are also unbeaten in their last 11 matches most of which – barring their final La Liga 2019-20 game against Leganes – they have won since returning to action in June. Manchester City v Real Madrid Dream11 Prediction in UEFA Champions League 2019–20.

City have played 12 games in that period and lost three – all of them coming away from home. At the Etihad though, they have been on a scoring streak. They are on a winning run of seven games at home and have scored 26 goals in those games while conceding only once. Five of those seven matches, City have won by a minimum margin of three goals, including wins over Arsenal and Liverpool. Manchester City vs Real Madrid, UEFA Champions League Live Streaming Online.

They thrashed Norwich City 5-0 in their last Premier League clash at the Etihad and will be confident for a similar result against Madrid, who last scored three goals nine matches ago. Take a look at some key players for the Manchester City vs Real Madrid Champions League round of 16 second leg clash.

He assisted 20 times in the Premier League this season and scored 14 goals. Kevin de Bruyne equalled Thierry Henry’s record number of assists this season and arguably has been the player of the English top-flight this term despite City failing to retain their league title. De Bruyne assisted Gabriel Jesus for the equaliser in Santiago Bernabeu and scored the other. He will be key to Guardiola and City if they are to maintain that lead.

The Frenchman has just stepped up and become more responsible since Cristiano Ronaldo’s departure from the Bernabeu. In two seasons after Ronaldo left, Benzema has netted 20-plus goals in successive La Liga seasons. He finished four goals behind Lionel Messi in La Liga but was ahead on goals scored to win matches. His goals helped Real Madrid lift the La Liga title after a wait of three years and if they are to overturn 1-2 deficit in the Champions League, Benzema needs to be firing goals.

Hazard was left out of Real Madrid’s final La Liga 2019-20 match against Leganes and has played only 62 minutes of Real’s last three games. He looked short of full fitness after coming back from a second ankle injury but Zidane confirmed that the Belgian was fit and ready to face City. Hazard played a minimal role in Real’s La Liga triumph but will hope he can take them all the way to a Champions League title win and prove his quality to the fans.

With top-scorer Sergio Aguero still out with injury, City and Pep Guardiola will be looking with hope towards this young Brazilian striker. His headed goal pulled Man City level at the Bernabeu and although he is a top-quality striker, Jesus is yet to show the Aguero level of consistency. This could well be his chance to show his worth to the club and stop them from looking for a striker to replace Aguero.

The young Englishman is the next big thing in Premier League football. Foden has shown his quality every time he has been in the field for City. The 20-year-old midfielder is already been tipped to replace David Silva in City’s midfield and is seen as a future at the club. De Bruyne will certainly be the key player but when things don’t work out well, Guardiola turns to this young magician. He will get time on the pitch against Real Madrid.

(The above story first appeared on LatestLY on Aug 07, 2020 06:32 PM IST. For more news and updates on politics, world, sports, entertainment and lifestyle, log on to our website latestly.com).