The Red Devils could be on course of losing one of the club's legends Cristiano Ronaldo as the player has lodged a transfer request following an underwhelming 2021-22 season at Manchester. Coach Erik Ten Hag has targeted Paulo Dybala to replace Ronaldo if he leaves this summer. 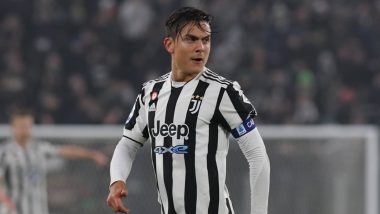 Manchester United have reportedly established contacts with Paulo Dybala's agent after Cristiano Ronaldo expressed his desire to leave Old Trafford in the summer window. New appointed Red Devils' coach, Erik Ten Hag has already targeted Dybala as a possible replacement of the Potuguese ace should he decide to depart the club, according to reports in Italy. The United club officials have made contacts with the Argentine's entourage for a potential summer move.

The Red Devils could be on course of losing one of the club's legend Ronaldo as the player has lodged a transfer request following an underwhelming 2021-22 season at Manchester. The Portuguese forward is very unhappy at Old Trafford due to the English club's idle activity in the summer transfer market. Manchester United's new coach Ten Hag has also not been able to land any big signing as of now, except one Tyrell Malacia who is expected to complete his medical procedures at the club in a few days after his $18 million transfer from Feyenoord. However, the top goalscorer in the world has been showing his unhappiness in continuing as a Red Devil since Man United failed to qualify for 2022-23 UEFA champions league.  Liverpool Unveil New Summer Signing Fabio Carvalho (Watch Video)

According to a report of The Times, Ronaldo informed Manchester United that he be allowed to leave Old Trafford should any good offer arrive in summer window. After that, the Mancheter-based club have stated and the Portuguese attacker, who have come to the club last season from Juventus, is not for sale.

Despite putting a not-for-sale tag on Ronaldo, Manchester United have been involved in finding suitable players who could replace the five-time Ballon D'Or winner. And according to Italian media, Ten Hag has targeted Paulo Dybala as a possible summer signing. The Argentine attacker is free agent now as his contract at Juventus has expired at the end of June, 2022. The talented footballer has been heavily linked with AC Milan and Inter Milan for a summer move, with Napoli showing constant interests to land the midfielder cum forward.  Cristiano Ronaldo Latest Transfer News: 5 Clubs That Can Sign Manchester United Superstar This Summer

According to La Repubblica, Arsenal and Man United both have contacted with the 28-year-old Argentina international. These two clubs have been in touch of the player's agent Jorge Antun with Inter Milan getting close to reach an agreement. However, it remains to be seen whether Cristiano Ronaldo leaves United this season or stay for another year to lead the Red Devils' attack under Ten Hag's watch.

(The above story first appeared on LatestLY on Jul 04, 2022 02:13 PM IST. For more news and updates on politics, world, sports, entertainment and lifestyle, log on to our website latestly.com).