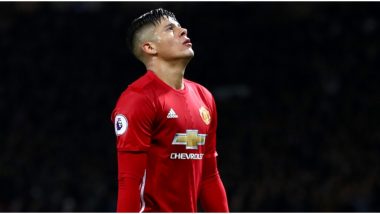 Manchester Unites are set to terminate defender Marcos Rojo’s contract with the club as the Argentine is set to secure a move back to his native country. The 30-year-old has found game-time hard to come by on recent seasons as he had fallen down the pecking order under manager Ole Gunnar Solskjaer and is yet to make an appearance for the first team this campaign. Premier League Completed Deals January Transfer Window 2021: From Martin Odegaard to Jesse Lingard, Full List of Players Signed and Sold by Each EPL Club.

According to a recent report from the Sun, Manchester United will part ways with Marcus Rojo as the Red Devils are set to rescind the 30-year-old current contract after the defender’s personal trainer leaked the information about his transfer to the Argentine side Boca Juniors on social media. Marcus Rashford Attacked Racially on Social Media, Manchester United Forward Says, ‘Humanity at Its Worst’.

Marcus Rojo signed his current contract with the record Premier League champions in 2018 but has hardly featured under Ole Gunnar Solskajer, starting just five league games since. This season, the Argentine has been playing with the Under-23s in League 2 but has managed just 45 minutes in the competition against Everton in October.

The Argentine in order to get regular game time was sent on loan to Estudiantes in January 2020, making just one appearance for the club before the coronavirus pandemic brought an halt to the campaign.

Marcus Rojo first joined United in 2014 under Louis van Gaal, after appearing in the World Cup final for Argentina against Germany. He made 22 Premier League appearances in his first season in the Premier League but has failed to match that tally again.

(The above story first appeared on LatestLY on Feb 01, 2021 12:52 PM IST. For more news and updates on politics, world, sports, entertainment and lifestyle, log on to our website latestly.com).