Arteta played down speculations insisting he is ‘very happy’ at Arsenal and is focused on continuing the work he is doing. Arteta also worked as an assistant to Pep Guardiola, who Laporta had appointed as the Barcelona head coach in 2008, for three seasons. But he dismissed all reports and said he was focused on the job at North London. 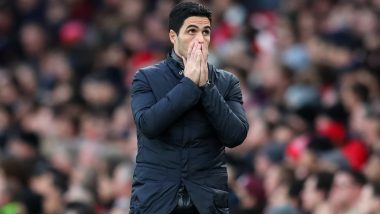 Mikel Arteta played down speculations about him being in the running to become the next Barcelona head coach. Arteta, a former La Masia Graduate, emerged as a potential managerial target for Barcelona with Joan Laporta, who is the favourite to be elected as the next Barcelona president, identifying Arteta as a potential replacement for current manager Ronald Koeman if he is voted to power. Arteta came through the ranks at Barcelona but departed without making an appearance for the senior team. Barcelona Issue Official Statement After Catalan Police Raid Club's Headquarters.

The Spaniard, however, played down the reports insisting he is ‘very happy’ at Arsenal and is focused on continuing the work he is doing in North London. Arteta also worked as an assistant to Pep Guardiola, who Laporta had appointed as the Barcelona head coach in 2008, for three seasons. But he dismissed all reports and said he was focused on the job at North London. Eric Garcia Transfer News Update: Manchester City Defender To Join Barcelona As Free Agent This Summer.

Asked if he wishes to manage Barcelona in the future, Arteta said: “Today and tomorrow I am the manager of Arsenal football club and I am really enjoying it. And I want to do much better than what we have done so far. What I can tell you is I feel privileged to manage this football club and that I’m extremely happy.”

Laporta, who took Barcelona to the pinnacle of European glory during his first stint as the Barcelona president, is one of three candidates running to become the club’s next president following the resignation of former president Josep Maria Bartomeu. Victor Font and Toni Freixa are the other two candidates vying for the post. The presidential elections were set to be held in January earlier this year but was postponed due to the Coronavirus pandemic. The election is now set to take place on March 8 (Monday).

Arteta, meanwhile, has two years remaining on his current Arsenal deal. He was appointed as the Gunners manager in December 2019 after the sacking of Unai Emery and guided the club to the FA Cup and Community Shield titles in his first season. He revealed that the club is yet to start a discussion of a potential extension

“We are in the middle of the season, we have a lot to play for and at the moment it's not a priority. I still have my contract here and I'm happy here, and I don't think it's something urgent."

(The above story first appeared on LatestLY on Mar 03, 2021 05:07 PM IST. For more news and updates on politics, world, sports, entertainment and lifestyle, log on to our website latestly.com).