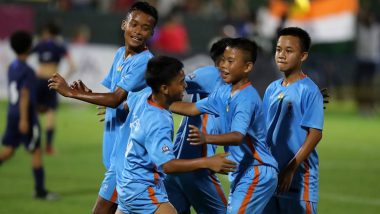 Dubai, April 12 : Minerva Academy trounced Dubai-based La Liga HPC Academy 4-0 to win the Mina Cup for U12, here on Tuesday. Minerva, who have defeated teams like Go Pro Sports Club, Barcelona before entering the finals, opened the scoring in the 13th minute. A throw-in down the left led to a bit of a scramble in the box, but the quickest to react was Thiyam, who fired the ball into the back of the net to make it 1-0.

Thiyam was indeed unstoppable as he scored in the very next minute again. La Liga HPC was clearly hassled, and Minerva took the chance to open them up again. The ball was played to Thiyam in a similar position to where he scored his first from. He had just one thing in mind, took a touch and slotted it into the bottom corner. It was looking very comfortable indeed for the team from India, who held onto their 2-goal lead through long periods of the game. IPL 2022 Purple Cap List Updated: Yuzvendra Chahal Leads, Wanindu Hasaranga Adds To His Tally.

A win was imminent, but the Minervans were hungry for more. It was Thiyam yet again, who provided the third, and his hat-trick goal was his best of the evening. The ball fell for him just outside the box, and he put his foot through it for the first time to find the bottom corner. It was a stunning finish. With the trophy in the bag, there was still time for just one more goal, which came in stoppage time. An excellent move down the right culminated with Jayed getting a tap-in, which he put away to make it 4-0. IPL 2022 Orange Cap List Updated: Robin Uthappa, Shivan Dube Enter Top Five, Jos Buttler Leads.

With that, Minerva Academy snapped up the victory and indeed snapped up the 2022 Mina Cup trophy. Thiyam won the Man of the Tournament, as he was the top-scorer in the competition, scoring a whopping 12 goals in five matches. He was presented the award by Teddy Sheringham. In total, Minerva Academy scored 19 goals over five games, without conceding a single one.

(The above story first appeared on LatestLY on Apr 13, 2022 08:31 AM IST. For more news and updates on politics, world, sports, entertainment and lifestyle, log on to our website latestly.com).