Mo Salah’s strike was also the fastest goal Liverpool have scored in the UEFA Champions League. The goal, however, wasn’t enough to fetch his side a win in their final Group D match. They were held to 1-1 draw after Alexander Scholz equalised from the spot in the second half for the visitors. Liverpool still topped the group. 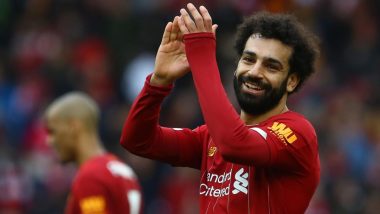 Mohamed Salah surpassed Steven Gerrard to become Liverpool’s all-time leading goalscorer in UEFA Champions League. The Egyptian has now scored 22 goals in the UCL for Liverpool overtaking Gerrard, who scored 21 times in his 17-year career for Liverpool. Salah scored within the first minute against Midtjylland to record his 22nd UCL goal for the Reds and go past Gerrard as the club’s highest goal-scorer in the competition. The 28-year-old, who already holds the record for most European goals in a single season for Liverpool, added another fresh feather to his illustrious hat. Sergio Aguero Injury Update: Manchester City Striker Won't Start Against Manchester United, Confirms Pep Guardiola.

Salah’s strike, which came just 55 seconds after kick-off was also the fastest goal Liverpool have scored in the UEFA Champions League. His goal, however, wasn’t enough to fetch his side a win in their final Group D match. They were held to 1-1 draw after Alexander Scholz equalised from the spot in the second half for the visitors. Despite being held at home, Liverpool topped Group D and will be in the first pot for the UCL round of 16 draw. Kylian Mbappe Beats Lionel Messi to Become the Youngest Player to Score 20 Champions League Goals.

Since joining Liverpool in 2017, Salah has been sensational for Liverpool and has already guided the club to a record Premier League last season, which was their first league title win in 30 years. He also led the club to the UEFA Champions League title in 2018-19 having left the field after a shoulder injury in the previous years’ UCL final. In his four seasons for the club, Salah has already netted 106 goals in 170 appearances across all competitions for Liverpool.

He also holds the record for most goals in a debut season (44) for Liverpool, most Premier-League goals (32) in a single top-flight season and is also the fastest player to score 50 goals as well 50 Premier League goals for Liverpool. His teammates Sadio Mane (17) and Roberto Firmino (15) are, however, not far behind in the UCL goalscoring list for Liverpool.

(The above story first appeared on LatestLY on Dec 10, 2020 06:50 PM IST. For more news and updates on politics, world, sports, entertainment and lifestyle, log on to our website latestly.com).