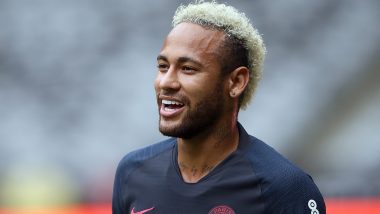 Later tonight, PSG is all set to take on Atalanta in the Champions League 2019-20 match which will be held in Portugal. The match is all set to happen at 12.30 am IST. Ahead of the game, Neymar Jr and his team PSG reached Portugal and the fans can't stop cheering for the Brazilian footballer.  Fans on social media also took to Twitter to cheer for the former Barcelona footballer. The netizens posted tweets cheering for Neymar Jr. Talking about the contest, PSG has never won against the Italian opposition. Four of their games ended with a draw and Atalanta won a couple of games. How to Watch PSG vs Atalanta, UCL 2019-20 Live Streaming Online in India? Get Free Telecast Details of UEFA Champions League in IST.

Atalanta began their Champions League 2019-20 campaign with three back-to-back losses but then fought their way in the tournament to seal a berth in the Round of eight. For now let's have a look at the video of Neymar Jr making an apperance and then the tweets posted by the netizens who are cheering the footballer.

Neymar a caminho do Estádio ❤ pic.twitter.com/mPJIEw8m8Z

Please don't let us down

The matches were supposed to happen eralier this year, but it was dueto the outburst of the COVID-19 that the matches are happening at one single venue. The winners here would be proceeding to the final four of the tournament.

(The above story first appeared on LatestLY on Aug 12, 2020 11:25 PM IST. For more news and updates on politics, world, sports, entertainment and lifestyle, log on to our website latestly.com).