Neymar Jr wants to return to Barcelona in the upcoming transfer window. It is understood that the ever-increasing possibility of Lionel Messi staying in Barcelona intrigues the Brazilian as he aspires to form a partnership with the Argentine superstar once again. 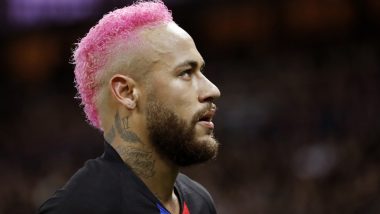 Neymar Jr has once again been linked with a return to Barcelona. The Brazilian left the Catalan club in 2017 joining Paris Saint-Germain on a record transfer fee and since then, has always been rumoured to return to the Blaugranas at some point. The 29-year-old has struggled with injuries since his move to the Parisian giants which has seen him miss a number of crucial fixtures. Mauricio Pochettino Reacts to Neymar’s Wish of Reuniting With Lionel Messi.

According to a recent report from Diario ARA, Neymar Jr wants to return to Barcelona in the upcoming transfer window. It is understood that the ever-increasing possibility of Lionel Messi staying in Barcelona intrigues the Brazilian as he aspires to form a partnership with the Argentine superstar once again. Neymar Jr Transfer Update: Lionel Messi & Brazilian Forward Could Play Together At Barcelona Once Again!

Barcelona boss Ronald Koeman in a recent press conference reacted to the rumours when questioned about the possibility of the arrival of Neymar Jr or Erling Haaland. ‘I do not know if it is possible because we spoke about the future of this team and the final decision is always by the board. It is not up to me to give the answer,' he said.

Koeman's response when asked by @eastonjamie if it's possible for Barça to sign players like Haaland or Neymar this summer pic.twitter.com/wiEoOuuMiE

As per the publication, the 29-year-old has halted his renewal talks with Paris Saint Germain despite having reached a verbal agreement with the club. The Brazilian wants to return and is open to lower his wage demands given the current financial situation of Barcelona and has already informed the Catalan club’s hierarchy about his decision.

Neymar Jr’s current contract with Paris Saint Germain ends in 2022 and it is reported that the Brazilian has agreed to a four-year extension. The 29-year-old on several occasions has expressed his desire to continue at the Parisian club but is yet to pen a new deal.

(The above story first appeared on LatestLY on Apr 04, 2021 08:43 PM IST. For more news and updates on politics, world, sports, entertainment and lifestyle, log on to our website latestly.com).