Panama Squad for 2018 FIFA World Cup in Russia: Lineup, Team Details, Road to Qualification & Players to Watch Out for in Football WC

Panama will be playing two international friendly matches as a part of FIFA World Cup 2018 preparations. They will take on Northern Ireland on May 30 and Norway on June 6. 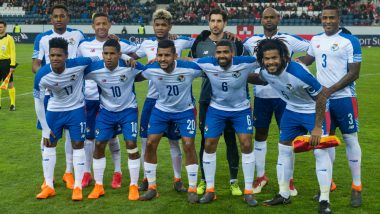 Panama has qualified for their first ever FIFA World Cup 2018 in Russia and this team has achieved what no other in the history of Panama has been able to achieve. The country is traditionally known for its craze for basketball, baseball and boxing and has produced some of the great champions in the field but this team goes to Russia to popularize the game back home. The Red Wave venture into the cup with nothing to lose and could be a potential banana skin for their group opponents.  They have announced a provisional squad for the World Cup and it calls for a detailed look at Panama team lineup, their chances of making to Round of 16 against Belgium, England and Tunisia in Group G. FIFA World Cup 2018 Schedule in IST for PDF Download: Fixtures, Groups, Time Table with Match Timings & Venue Details of Football WC in Russia.

Veteran keeper Jaime Penedo is all set to start between the posts in Russia and at the age of 36 might well look to end his international career on a high. Captain Roman Torres leads their defensive line and will have Felipe Baloy, Harold Cummings and Adolfo Machado for company. Gabriel Gomez has represented his country 142 times and has wealth of experience under him. Another central midfielder Armando Cooper is also in fray to start every game for Panama and Alberto Quintero and Anibal Godoy have both had good qualification campaigns. 2018 FIFA World Cup Friendlies Fixtures: Check Full Warm-Up Schedule Timetable in Indian Time for Germany, Brazil, Spain, England, Argentina and All 32 Countries.

Gabriel Torres and Blas Perez will be the two forwards in a conventional 4-4-2 deployed by their coach Hernan Gomez. While this gives them the freedom to deploy wingers and put in the crosses, it makes up for an open game. In a high-pressure tournament such as a World Cup, the coach may put in a five-man midfield to stifle the opposition attack and look to counter on the break as most weak teams do.

Panama finished third in the fifth round of the CONCACAF World Cup qualifiers and hence booked the last available direct seat available for the tournament in Russia from the CONCACAF region. They won three, drew four and lost three to finish with 13 points which were enough to seal the deal.

Panama was eliminated in the third round of the 2014 FIFA World Cup qualifiers when they finished behind Honduras in Group C, hence did not take part in the World Cup in Brazil.

Roman Torres: He is a battling a hamstring injury off late but should be fit enough in time for the first match. He scored the goal that took Panama to the World Cup and is a key figure for the Red Wave. He is exceptionally good in the air and hence is an integral part for his team in both the boxes.

Blas Perez: He is Panama’s second highest goal scorer with 41 goals and has been representing his nation for the last 16 years. Although at the twilight of his career, he can contribute equally from the bench or from the start. He will be vital with Panama chasing the game particularly.

(The above story first appeared on LatestLY on May 24, 2018 05:41 PM IST. For more news and updates on politics, world, sports, entertainment and lifestyle, log on to our website latestly.com).