Paul Pogba Hits Out at the Sun for Publishing Fake News, Shares Snap of Report and Writes, ‘Big Lies To Make Headlines’

The report by The Sun claimed that the French midfielder stalled his talks of a new contract at United following the defeat and that he snubbed under-fire manager Solksjaer. Following this development, Pogba took to Twitter to slam the report, calling it, 'Big Lies To Make Headlines’. 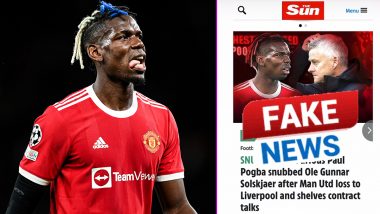 Paul Pogba on Wednesday lashed out at The Sun for using 'big lies to make headlines' following a report published by them which talked of him snubbing Manchester United manager Ole Gunnar Solksjaer after their heavy defeat to Liverpool. There have been reports of a growing sense of tension and unrest in the Manchester United camp following a string of poor results and it all seemed to escalate to a new high after they were thrashed 5-0 by Jurgen Klopp's ruthless Reds at Old Trafford last weekend. The report by The Sun claimed that the French midfielder stalled his talks of a new contract at United following the defeat and that he snubbed under-fire manager Solskjaer. Mohamed Salah’s Hat-Trick Humiliates Manchester United as Cristiano Ronaldo’s Team Loses 0-5, Fans Trend #OleOut!

Pogba retaliated angrily to the report, stating that it was pure lies and nothing else. Take a look at his tweet below:

Pogba had a good start to this season, scoring four assists in his very first game but has slowly dropped off the radar with United's poor form in their last few matches. As a matter of fact, he was preferred by Ole in the starting XI since United's 2-4 loss to Leicester City and things have only become worse after that. Speaking later on, he said, "We’ve had these kinds of games for a long time. We have not found the problem, conceding easy goals – we need to be more mature, play with more experience and arrogance in a good way. We need to find something, we need to change.”

United, playing a potentially season-defining match against Liverpool, collapsed to a thumping loss which even saw some of the home fans leave the stadium at half-time. Liverpool were too good for Manchester United with Mohamed Salah continuing his brilliant form with a hat-trick. United failed to even score one goal, a result which left many speculating and even reporting that the players have lost confidence in Ole.

(The above story first appeared on LatestLY on Oct 27, 2021 06:26 PM IST. For more news and updates on politics, world, sports, entertainment and lifestyle, log on to our website latestly.com).