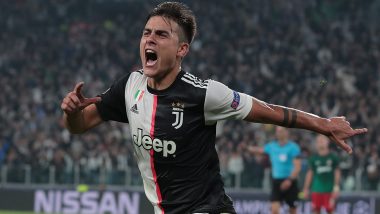 After their Champions League exit at the hands of Manchester City in the round of 16, Real Madrid are looking to rebuild their team and have recognized the perfect star in Paulo Dybala. Los Blancos are preparing to bring the Argentine to Madrid next summer and could offer a player in order to reduce the transfer fee. The 26-year-old struggled with injuries this season but played a crucial role in Juventus' Serie A win. Andrea Pirlo 'Honoured' to Be Named as Juventus Manager, Says 'Ready for This Amazing Opportunity'.

According to a recent report from Sport Mediaset, Real Madrid are preparing a sensational player plus cash deal in order to sign Paulo Dybala from Juventus in the summer. Either of Toni Kroos or Francisco ‘Isco’ Alarcon could be included in the deal by the Spanish giants which could persuade the Bianconeri to let go of their star player. Cristiano Ronaldo's Agent Jorge Mendes to Meet PSG Sporting Director to Discuss Potential Move.

Real Madrid value both the players to be around a combined price of €100 million. Paulo Dybala is one of the best attacking players in the world at the moment and could give Los Blancos a much-needed attacking threat, a thing they have lacked since Cristiano Ronaldo’s departure to Juventus couple of years ago.

But according to the publication, Juventus are not keen on losing their number 10, mainly when they themselves are undergoing a rebuilding phase under new manager Andrea Pirlo. But it is understood that their stance could change due to the financial implications if Cristiano Ronaldo decides to stay at the club.

The five-time Ballon d’Or winner, who arrived at Turin in 2018, has been linked with a move to PSG in recent days after Juventus’ poor performances this season. And if the 35-year-old is to leave in the summer, the Italian giants will not let their star forward leave at any cost.

(The above story first appeared on LatestLY on Aug 10, 2020 06:25 PM IST. For more news and updates on politics, world, sports, entertainment and lifestyle, log on to our website latestly.com).