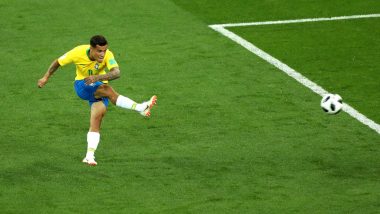 Brazilian superstar and Barcelona playmaker, Philippe Coutinho celebrates his 28th birthday on June 12, 2020 (Friday). Nicknamed ‘The Magician’ by Liverpool fans for his vision, passing and ability to strike long-range rockets, Coutinho currently plays for Barcelona whom he joined from Liverpool in 2018. Despite his struggles at Camp Nou, he is still regarded as one of the best playmakers and midfielders in world football in recent times. Coutinho’s major breakthrough came at Liverpool where he enjoyed four fruitful seasons before moving to Spain. Philippe Coutinho Transfer News Update: Arsenal Boss Mikel Arteta Interested in Brazilian Forward.

Born in Rio de Janeiro, Brazil, Coutinho first came to international limelight when Inter Milan swooped him from Brazilian side Vasco de Gama. Italy club Inter paid €4 million for a then young Coutinho while manager Rafa Benitz also described him as the ‘future of Inter’. Coutinho made his senior debut at Inter in 2010 and also spent a loan season at Espanyol before joining Liverpool in 2013 where he truly blossomed as a footballer. As he celebrates his 28th birthday, take a look at some top goals scored by the Brazilian.

Just three minutes into the match, Coutinho curled a powerful striker into the top corner from 30 yards out. It was a stunner and left no chance for the opposition goalkeeper. Liverpool went on to win the game 2-0.

Once again Coutinho scored the opening goal only this time it was in a tense 2018 FIFA World Cup qualifiers against football arch-rivals Argentina. The Magician dribbled through a host of Argentine defenders before thrusting the ball into the top corner.

Barcelona were already leading 3-0 in the 2018-19 UEFA Champions League Quarter-Finals second-leg. And Coutinho added cherry on the cake with a wonderful curler from outside the box.

Coutinho scored his first hat-trick for Bayern Munich against Werder Bremen helping his side thrash Bremen 6-1. It was, however, his second goal in the game that will certainly go down as one of the best goals of the season. The Brazilian controlled a delicious chip from David Alaba before scoring with a nonchalant no-look chip over Bremen goalkeeper.

In Brazil’s opening match at the 2018 FIFA World Cup, Coutinho opened the scoring within the opening 20 minutes with his signature shot – a curler from outside the penalty box and into the top corner.

The fact that two among these five goals earned him a Goal of the Month award and another club Goal of the Season award, told the quality and speciality of these strikes. Coutinho has so far scored 116 career goals with 99 of them coming in club football in 415 appearances. He has been widely praised for the quality of his goals with Mauricio Pochettino famously saying ‘he has special magic in his feet.’

(The above story first appeared on LatestLY on Jun 12, 2020 10:00 AM IST. For more news and updates on politics, world, sports, entertainment and lifestyle, log on to our website latestly.com).