Robert Lewandowski is the most lethal striker in Europe at the moment and Paris Saint-Germain will do well to contain the Polish skipper. Serge Gnabry, Thomas Muller and Ivan Perisic have been running riot in the attacking third and it will not be a surprise if they are in the thick of the action once again. 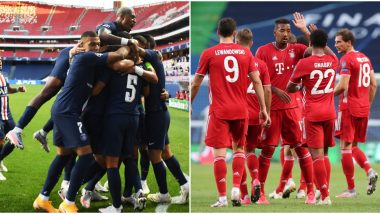 PSG vs Bayern Munich, UEFA Champions League final 2019-20 Live Telecast and Free Live Streaming Online: A COVID-19 hit Champions League season finally reaches its climax with PSG taking on Bayern Munich tonight in the summit clash. The event was unfathomable back in February when the Corona outbreak was at its peak but credit to UEFA, the European football body has been able to get the job done during tough times. PSG have flopped for several years in Europe despite their high-profile signings and money power but 2020 has brought a change in fortunes. They are in for a tough day at work though with Bayern Munich playing football with machine-like precision. It is a high octane clash which will have its fair share of drama and emotions. PSG vs BAY Dream11 Prediction in UEFA Champions League 2019–20 Final: Tips to Pick Best Team for Paris Saint-Germain vs Bayern Munich UCL Football Match.

Idrissa Gueye and Marco Verratti have both returned to first-team football following some fitness issues that resulted in absence from the squad. The duo could walk straight into the starting eleven if manager Thomas Tuchel is ready to gamble on their match fitness. Kylian Mbappe as the lone man forward did the trick against RB Leipzig with Neymar and Angel di Maria using their pace to hit the opponent on the break. Bayern Munich showed their vulnerabilities at the back against Lyon and PSG sure have the arsenal to hit them on the counter.

Benjamin Pavard is fit and should start at the right-back for Bayern Munich which means Joshua Kimmich could return to the central midfield position. The partnership of Joshua Kimmich and Leon Goretzka is the preferred one for manager Hansi Flick who like the dynamic nature of the duo. Robert Lewandowski is the most lethal striker in Europe at the moment and PSG will do well to contain the Polish skipper. Serge Gnabry, Thomas Muller and Ivan Perisic have been running riot in the attacking third and it will not be a surprise if they are in the thick of the action once again.

Paris Saint-Germain vs Bayern Munich clash in UEFA Champions League final will take place on August 24, 2020 (Sunday midnight). The match will be played at the Estádio do Sport Lisboa e Benfica and the final has a scheduled start time of 12:30 am IST (Indian Standard Time).

Live streaming of the UEFA Champions League 2019-20 final will be available online on SonyLiv. Fans watch catch PSG vs BAY the match live on either the SonyLiv app or on the website. PSG have won five times against Bayern Munich in their eight previous matches but their latest clash tilts heavily in favour of the Bavarians.

(The above story first appeared on LatestLY on Aug 24, 2020 12:03 AM IST. For more news and updates on politics, world, sports, entertainment and lifestyle, log on to our website latestly.com).