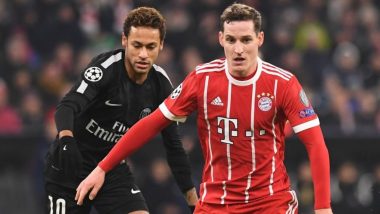 Two of Europe’s footballing powerhouses clash in the UEFA Champions League final which is being billed as a game between like-minded clubs build to attack naturally. Bayern Munich have rarely lost a contest in 2020 and after steamrolling clubs back in Germany; they have set their eyes on European glory. Opponents Paris are no pushovers, but lack of big-game experience is an issue going into the final. PSG coach Thomas Tuchel knows all about Bayern Munich from his days as Borussia Dortmund manager and this match represent a perfect opportunity for him to extract revenge for those painful losses in Bundesliga. PSG and Bayern Munich have clashed eight times previously with the French club holding the edge with five wins and Bayern Munich winning the rest three. A look at the last five games between the clubs. PSG vs Bayern Munich Champions League Final: Quick Stats You Need to Know Ahead of UCL 2019–20 Summit Clash.

Bayern Munich 3, PSG 1 – 5 Dec 2017: A Goal from Robert Lewandowski and Corentin Tolisso brace helped Bayern Munich triumph over PSG. Kylian Mbappe got a consolation for the visitors with a 50th-minute strike.

PSG 3 Bayern Munich 0 - 27 Sep 2017 – It is always a rare sight for Bayern Munich to be dismantled easily in Europe, but PSG managed to do so with goals from Dani Alves, Neymar and Edinson Cavani.

Bayern Munich 2 , PSG 0 – 18 Oct 2000: Back in the times when PSG were relying on imports from South America and lacked financial clout they enjoy currently. Hasan Salihamidzic and Paulo Sergio scored in this comfortable win for the Bavarians. PSG vs Bayern Munich, Champions League Final Live Streaming Online.

PSG 1, Bayern Munich 0 – 26 Sep 2000: The game was heading to a goalless draw when Laurent Leroy scored in the 89th min to claim all three points for PSG. That was one of the most memorable moments in the French striker’s career.

PSG 3, Bayern Munich 1 – 5 Nov 1997: Franc Gava, Florian Maurice and Jerome Leroy scored for PSG to secure a comfortable win for PSG. Markus Babble had equalised for Bayern Munich in the 29th minute, and the game remained at 1-1 for a while before Florian Maurice inflicted the damage on the Bavarians. PSG vs Bayern Munich, UCL 2019–20 Final: As Both Teams Contest for Title Win, a Look Into Their Journey to the Summit Clash of UEFA Champions League.

PSG has a good record against Bayern Munich, and it will be interesting to see if they are able to maintain that against a quality Bayern Munich team whose players are coming up some of the best football of their life.

(The above story first appeared on LatestLY on Aug 23, 2020 05:07 PM IST. For more news and updates on politics, world, sports, entertainment and lifestyle, log on to our website latestly.com).