Angel di Maria assisted the first, third and scored the second goal and also created a slew of records to lead PSG to their maiden Champions League final. The win also kept the French side on course for a memorable treble this season. Marquinhos and Julian Bernat were the other goalscorers for PSG in the semi-final. 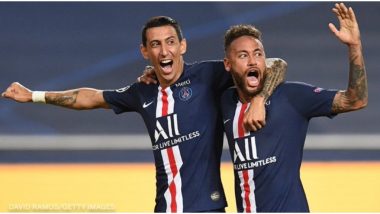 Angel di Maria scored one and assisted twice as Paris Saint-Germain advanced to their first UEFA Champions League final after beating RB Leipzig 3-0 in the UCL 2019-20 semis on Tuesday. Di Maria, who assisted the first and third and scored the second goal, created a slew of records to lead PSG to their maiden final. The win also kept the French side on course for a memorable treble this season. Marquinhos and Julian Bernat were the other goalscorers for PSG in the semi-final. They now face either of Bayern Munich or Lyon in the final. PSG vs RB Leipzig, UCL 2019–20 SF Goal Video Highlights: Marquinhos, Angel Di Maria and Juan Bernat Help Paris Saint-Germain Cruise to Maiden UEFA Champions League Final With 3–0 Win.

Maquinhos put PSG ahead in the 13th minute with a header after Kylian Mbappe’s strike minutes earlier was ruled out due to a handball and Neymar had brushed the post six minutes earlier. Marquinhos, who also scored the leveller against Atalanta in the quarter-final, nodded home a Di Maria cross to put PSG ahead in the semi-final. PSG Beats RB Leipzig 3-0 to Reach the Finals of the Champions League 2019-20, Netizens Hail Angel DI Maria for Prolific Records (See Tweets).

Neymar once again came close to scoring later in the first half with an audacious free-kick that struck the post before he found Di Maria with a flick inside the box after Leipzig goalkeeper played Peter Gulacsi straight to Leonardo Paredes when attempting to play from the back.

Di Maria scored and made it 2-0 as PSG went into the break with a two-goal cushion. Leipzig manager Julian Nagelsmann, who could have become the youngest manager ever to reach the Champions League final, responded with a double change. The German side immediately looked a different team in the second-half and should have really pulled one back through Yussuf Poulsen.

But they missed and PSG struck again. Bernat burst into the box but was denied by Gulasci only for Nordi Mukiele to slip while trying to clear. Di Maria then found the Brazilian left-back with a cross and he headed home for the third. Take a look at some records and stat highlights from the PSG vs RB Leipzig semi-final match.

# Angel di Maria is unbeaten in all 17 Champions League matches that he has scored in. Only Mohamed Salah (18), Gonzalo Higuain (21) and Patrick Kluivert (25) have scored in more games without facing a loss. In the 17 UCL games that Di Maria has scored, his side have won 15 and drawn 2

# PSG’s record of 110 games to reach their maiden Champions League final is the most number of matches played by a side before reaching the final. The French side overtook Arsenal’s record of 90 games between 1971 and 2006. Arsenal had played the 2005-06 final

Paris Saint-Germain will now have their eyes on the second semi-final where Bayern Munich take on Lyon for a place in the final. A win will make PSG the eighth different club and the first French side to win a treble. Bayern Munich are also on course for a treble this season.

(The above story first appeared on LatestLY on Aug 19, 2020 10:17 AM IST. For more news and updates on politics, world, sports, entertainment and lifestyle, log on to our website latestly.com).