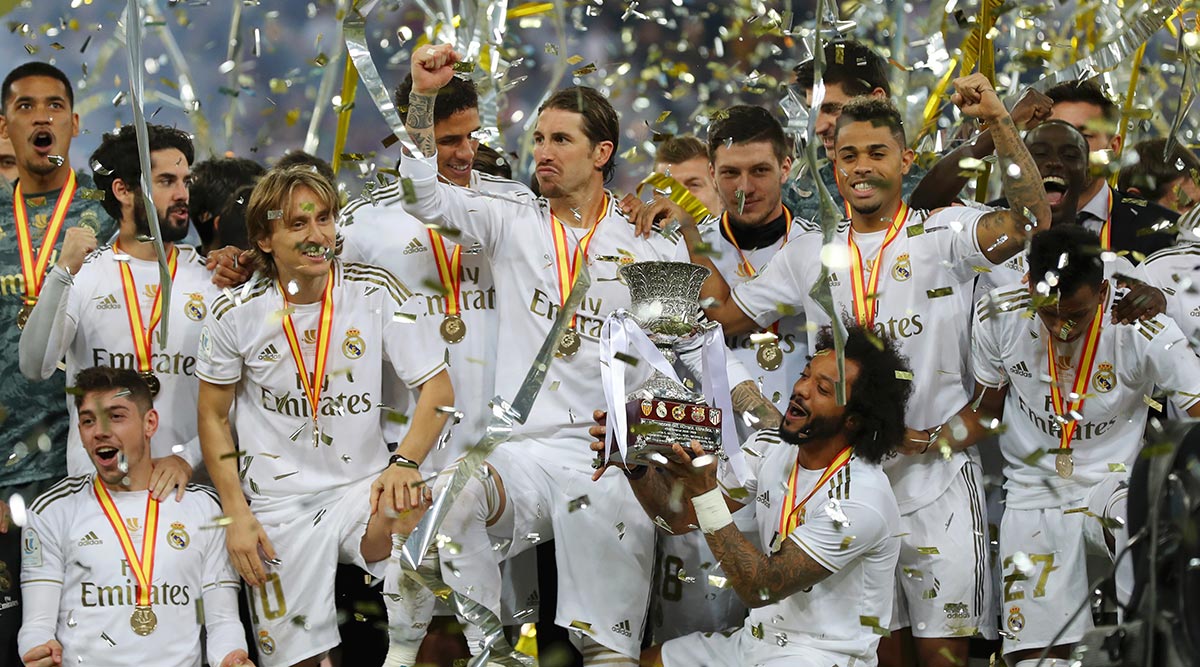 Thibaut Courtois shone as Real Madrid defeated Atletico Madrid in the finals of 2020 Supercopa de Espana on 4-1 penalties to lift the title. The two arch-rivals fought neck to neck in the first 90 minutes and extra time of the match where neither side scored a goal. However, Real Madrid held on to their nerves in the penalty shootout and went on to clinch the trophy. The Real Madrid Strikers struck the nets in all of their first four shootouts. On the other hand, however, piercing the defences of goal-keeper Courtois proved to too much for the Atletico forwards as they could register only one goal and eventually lost the match. Lionel Messi Gets into a Spat With Joao Felix During Barcelona vs Atletico Madrid, Supercopa De Espana 2019-20, Team Barca Joins Confrontation (Watch Video).

Speaking of the goals registered in the penalty shootouts, Dani Carvajal took the first strike for Reals as he dispatched the ball through Jan Oblak defences and registered a goal. Saul Miss, however, got a great opportunity to smash the nets in Atletico’s first strike as Courtois misjudged the shot and moved the other way but the ball went on to strike the pole. Rodrygo, Luka Modrić struck the second and third goal for the Reals before skipper Sergio Ramos registered a goal in the fourth shootout to decide the match. For Atletico Madrid, Kieran Trippier was the only one who smashed the nets but it didn’t prove to be enough. Meanwhile, let’s look at the goal highlights of the high-voltage final match.

Real Madrid lifted the Super Cup title for the 11th time and they must be delighted by their triumph. Their confidence was certainly high after defeating Valencia in the semi-finals and riding on that, they went on to clinch the title too. On the other hand, Atletico Madrid also looked in the hunt for the major part of the match. However, they failed to put the foot on the paddle in crucial times and eventually lost the match.