The Italian did not make excuses but instead admitted that he was to blame for Real Madrid's loss. Barcelona were completely dominant on the night, with Pierre-Emerick Aubameyang running the show, scoring a brace and registering an assist. 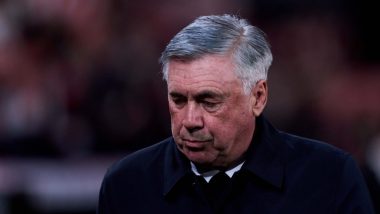 Carlo Ancelotti was in no mood to dodge the burden of what was a heavy defeat for Real Madrid at the hands of Barcelona in El Clasico. Los Blancos were completely taken aback and outplayed at home by Barcelona, who claimed their first victory in this fixture in three years, thanks to a sensational performance from Pierre-Emerick Aubameyang. It was indeed a night to forget for the home fans at the Santiago Bernabeu. Real Madrid 0–4 Barcelona, La Liga 2021–22 Video Highlights

Speaking to the media after the match, the Italian did not make excuses but said that it was his fault for his team's performance. "It is tough because it is a Clasico, for the fans when we play against Barca... it is a blow, we have lost a battle, we still have an advantage and we have to stay calm and get back our injured players.  We were unrecognisable, everything went wrong, we have to forget that and move forward, we have a big lead [in La Liga]. I, the coach, am at fault," he said, as quoted by Goal.com. Pierre-Emerick Aubameyang Scripts Unique El Clasico Record As Barcelona Humble Real Madrid 4–0

Madrid did miss the services of their star striker Karim Benzema, who, a few days ago, had turned the UEFA Champions League round of 16 tie against PSG on its head with a second-half hattrick to help Real Madrid progress, despite falling at a 0-2 deficit. The Frenchman was surely missed by his side against Barcelona.

However, despite this loss, Real Madrid still look to be favourites for winning the La Liga title, sitting on top with a nine-point lead. Having said that, they would be very well-aware that such slip-ups in performance cannot happen, especially with Sevilla and Barcelona in the fray.

(The above story first appeared on LatestLY on Mar 21, 2022 01:48 PM IST. For more news and updates on politics, world, sports, entertainment and lifestyle, log on to our website latestly.com).