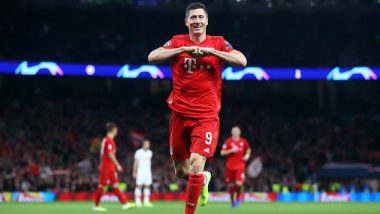 Looks like Robert Lewandowski is in no mood to slow down. A few days ago, he equalled the record of Cristiano Ronaldo and Lionel Messi and yesterday during the match against Eintracht Frankfurt he scripted yet another record for himself. The Bayern Munich striker went on to score a goal against the opponent and with this surpassed his own record as he scored the 45th goal of this season. Thus led his team into the finals of the German Cup 2019-20. Talking about Lewandowski, this is the first time that he has netted 45 goals in one season. Robert Lewandowski Becomes First Player to Equal Cristiano Ronaldo and Lionel Messi’s This Prolific Record, Achieves Feat During Union Berlin vs Bayern Munich, Bundesliga 2019-20 (Watch Video).

It took him 39 appearances to get him to his 45th goal.  The year 2020 has been quite an amazing one for Lewandowski as he has scored in 11 games out of 13. Talking about this particular game, the team won the match 2-1 and will face Bayer Leverkusen in the final on July 4 in Berlin for the finals of the German Cup.

For the first time in his senior club career, Robert Lewandowski has scored FORTY-FIVE goals in a single season. 🤜 🤛 pic.twitter.com/PifOLrg2uR

After the win, Robert Lewandowski also took to social media and sounded excited about the finals. Check out his post below

Ahead of the game, the teams also knelt on one knee and joined the protests for the on-going campaign #BlackLivesMatter. The social media campaign gained popularity after the death of George Floyd in USA.

(The above story first appeared on LatestLY on Jun 11, 2020 02:28 PM IST. For more news and updates on politics, world, sports, entertainment and lifestyle, log on to our website latestly.com).