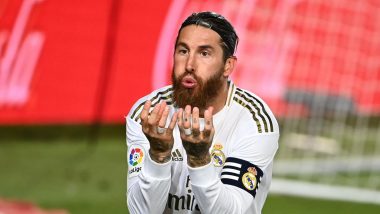 Right before the second leg of the match against Chelsea, the Real Madrid manager Zinedine Zidane heaved a sigh of relief as his team was boasted with the return of Sergio Ramos, Fede Valverde and  Ferland Mendy. The netizens were quite excited with the return of their three main players right before the important tie. Sergio Ramos was down with an injury and Fede was tested positive for COVID-19. Thankfully the players have recovered and have returned for the much0awaited fixture. The Los Blancos is all set to lock horns against Chelsea in an away fixture on May 6, 2021. Ahead of the game, team Real Madrid announced the 23-member squad on social media. Sergio Ramos Injured Before Real Madrid Faces Liverpool and Barcelona, Pens a Long Note.

The 23-member squad had the three above-mentioned names. The team has already reached London and Real Madrid President Florentino Perez is also travelling with the team. The official handle of the team shared the snaps of the squad leaving for London. If they happen to win the game on Wednesday, they will inch closer to their 14th UCL title.

Now, let's have a look at the squad below and the picture of the team leaving for London:

Ramos, Mendy and Valverde back in the squad 😍

🤝 President Florentino Pérez travelled with the team to London.#UCL pic.twitter.com/Mh8tHqJQ0R

Despite the return of the three players, Zidane will be missing out on the services of Raphael Varane and Dani Carvajal. The match will be held at 12.30 am IST on Thursday.

(The above story first appeared on LatestLY on May 04, 2021 09:14 PM IST. For more news and updates on politics, world, sports, entertainment and lifestyle, log on to our website latestly.com).