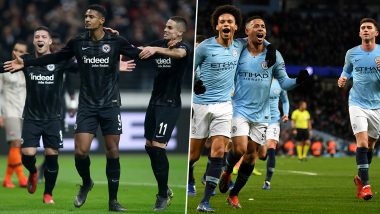 Manchester City may have been dominant in the English domestic league but their pursuit in Europe have always resulted in heartbreaking losses, including the away goal defeat to last season’s runner-up Tottenham Hotspur in the quarter-finals. And if Pep Guardiola and his team were aiming to chase the Champions League title this season, then their plans have already taken a hit with Man City left with all but one recognised central defender. City’s first-choice centre-back Aymeric Laporte is already out for four months and to add to the English team’s woes John Stones has now been ruled out after injuring himself in a training season.

Shakhtar Donetsk, however, have no such worries. They are three-time running winners of the Ukraine Premier League and are the favourites to retain the title for a fourth successive time. Shakhtar are undefeated in the domestic league since February and have the likes of Yevhen Konoplyanka and Junior Moraes in their ranks. The Ukrainian-Brazilian duo along with Taison possess the quality to trouble any top opponent and will certainly do the same against a depleted visiting side in Man City.

But despite their injury troubles, Manchester City can take enough pride from the fact that they are first English team to beat Donetsk in Ukraine – City thrashed Shakhtar 3-0 in the same stage last Champions League season – and will look to do the same this season. They may have defensive troubles at the back but in attack and midfield, City have the best recruits. They also hold a 3:1 win-loss ratio in head-to-head records, which reduces to 1:1 away from home.

Manchester City will face Shakhtar Donetsk in their opening Group C encounter in the 2019/20 Champions League. Shakhtar Donetsk vs Man City Group C clash will be played on late September 18 (Wednesday) night. The Champions League encounter is scheduled to start at 12:30 am IST (Indian Standard Time) and will be played at the Oblast Sports Complex in Kharkiv, Ukraine.

Sony Pictures Network is the official broadcaster of the 2019/20 UEFA Champions League in India. Football frenzy fans in India can tune into Sony Ten 2 and Sony Ten 2 HD channels in India to catch the live telecast of the Shakhtar Donetsk vs Manchester City game.

Shakhtar Donetsk suffered a humiliating 0-9 defeat 0-3 at home,  to Manchester City when both these sides met at the group stage in Champions League last season. Donetsk had, however, beaten the English team 2-1 at home in the 2017/18 edition of UCL before losing 0-2 away from home.

(The above story first appeared on LatestLY on Sep 18, 2019 11:30 PM IST. For more news and updates on politics, world, sports, entertainment and lifestyle, log on to our website latestly.com).