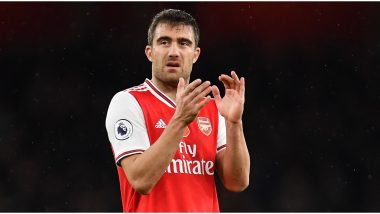 Arsenal centre-back Sokratis Papastathopoulos’ agent has denied reports claiming his client could be on the move this summer. Sokratis, who joined the Gunners from Borussia Dortmund in 2018, has found game time hard to come by under new manager Mikel Arteta with the former Man City assistant preferring David Luiz and Rob Holding as his first to centre-backs. Sokratis has reportedly deemed surplus to the club’s requirement and has been informed to look for other options. His agent Konstantinos Farras, however, has termed those reports as “fake news.” Shkodran Mustafi Injury Update: Arsenal Defender Undergoes Surgery, to Be Out of Action Until October.

The 32-year-old Greek international was a regular fixture under previous manager Unai Emery who signed him in the summer of 2018 for $23m. He has already represented the club 68 times in his two seasons at the Emirates and scored six goals. Most of those appearances have come under Emery. Since Arteta’s joining in December, Sokratis has played only once and was an unused substitute in the club’s last eight Premier League matches.  Thomas Partey Transfer News Update: Atletico Madrid Reject Arsenal’s Bid for Ghanaian Midfielder.

Reports also suggest that Arteta has told the Green centre-back in straight terms that he is no longer has a future at the club and will not be required next season. Sokratis currently has a year left in his contract and Arsenal are already reportedly looking for suitors to sell the Greek before he becomes a free agent next season.

Sokratis’ agent has, however, denied all such rumours and claimed all such reports were fake news. "He (Sokratis) will stay. I don’t see a reason to leave. I don’t know why everyone is writing wrong and fake news,” Konstantinos was quoted as saying by Goal during an interview to Journalist Fred Paxton.

The Green center-back had earlier stated that lack of regular football at Arsenal could persuade him to look elsewhere. "If I’m not happy, I don’t play enough or the coach doesn’t like me, I don’t care about the contract," he had told reporters. "For me, the money is not important, it is important I feel good, I feel happy and the team is happy with me. If not, I take the road and I finish.”

(The above story first appeared on LatestLY on Jul 29, 2020 04:21 PM IST. For more news and updates on politics, world, sports, entertainment and lifestyle, log on to our website latestly.com).