Spain Squad for 2018 FIFA World Cup in Russia: Lineup, Team Details, Road to Qualification & Players to Watch Out for in Football WC

Spain will begin their World Cup 2018 campaign against Portugal on June 15 in Group B encounter. They will next play Iran on June 20 and Morocco in the third and final group stage match on June 25. 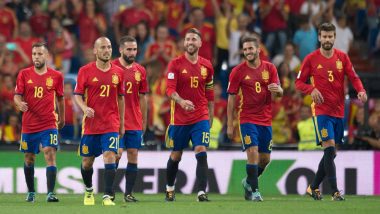 Spanish football is seeking to get back to its glory days as they have looked resurgent in the past two years under the guidance of Coach Julen Lopetegui who has not gone on names but pre-merit when it comes to his selection as well as overall management. The dark days of 2014 World Cup are well past now and this current Spanish squad is touted as favourites to win the cup in Russia. Such is the strength of Spanish football that there is a whole bunch of players who can make the starting eleven of any country but could not get a place in the 23-man list of Spain for FIFA World Cup 2018. Let us take a detailed look at Spain team lineup for 2018 FIFA World Cup, their road to qualification and players to watch out for in the coming tournament. FIFA World Cup 2018 Schedule in IST for PDF Download: Fixtures, Groups, Time Table with Match Timings & Venue Details of Football WC in Russia.

The La Roja has two of the game’s greatest defenders who have won it all in Sergio Ramos and Gerard Pique who if fit can be the rock on which their entire campaign will revolve around. Cesar Azpillicueta, Jordi Alba, Dani Carvajal, Nacho and Nacho Monreal are all excellent full backs, and each one is capable of a start. The midfield has one defensive midfielder in Sergio Busquets who does not have any cover, and any injury will ring in the alarm bells. There is no shortage of talent in the attacking midfield department with Andres Iniesta, Isco, Saul Niguez, David Silva and Thiago Alcantara, all present in the 23-man team.

The lone striker that should start in Russia will be a toss-up between Iago Aspas and Diego Costa with Aspas certainly having the edge. David De Gea is the arguably the World’s best goalkeeper at the moment, and Spain should benefit from his services.

With nine wins out of ten matches played, Spain finished top of Group G in European World Cup qualifiers and easily secured a spot in the 32 team World Cup 2018 in Russia. The finished the campaign with 28 points and had four players- David Silva, Diego Costa, Isco and Alvaro Morata-who finished as joint top scorers of the campaign for Spain with 4 goals each.

Spain had a torrid time in Brazil in the last World Cup losing the opening encounter 5-1 to the Netherlands followed by a defeat to Chile 0-2 in the second game of the group stage to bow out of the cup. A consolation 3-0 win against Australia did little to lift up the mood of Spanish camp as they finished third.

David De Gea: The 2017/18 Golden Glove winner in England and winner for four Manchester United POTY awards out of the last five years, David De Gea is an extraordinary talent. His presence between the stick is a morale-boosting event for the Spanish defense, and he is a kind of player who can get you out of trouble when the things are not clicking.

David Silva: The midfield maestro is a floater and can pick up some really dangerous positions to hurt the opposition back line. His killer passes are a delight for any striker, and he was the main reason City dominated the English League and captured it so easily.

Spain will be playing two friendlies – the first one is up against Switzerland on June 3 at El Madrigal in Villareal. Next match is against Tunisia on June 9 at Krasnodar Stadium, Krasnodar. Spain will begin their World Cup 2018 campaign against Portugal on June 15 in Group B encounter. They will next play Iran on June 20 and Morocco in the third and final group stage match on June 25.

(The above story first appeared on LatestLY on May 23, 2018 02:26 PM IST. For more news and updates on politics, world, sports, entertainment and lifestyle, log on to our website latestly.com).