Subrata Paul Opens Up About His Future, Says ‘Will Carry On Until Youngsters Push Me Out’ 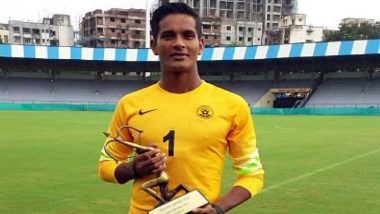 Subrata Paul has been one of the standout goalkeeper’s in Indian football for more than a decade and is showing no signs of slowing down at the age of 33. The Kolkata-born keeper who recently joined ISL side Hyderabad FC after three-years at Jamshedpur FC opened up about his future as he said that he had no plans to hang up his boots anytime soon. Subrata began his senior career at Mohun Bagan as a 16-year-old in 2004. ISL 2020–21 Transfer News: Hyderabad FC Sign Subrata Paul on Two-Year Deal.

Subrata has been a professional footballer for nearly 17 years but feels that his passion for the game ‘has no end’ and it is what keeps him going. ‘There’s no stage in the life of any footballer. All such stages are scripted in the mind of others who feel they can dismiss someone as he is over 30,’ Paul told Goal in an interview. Subrata Paul Thinks About Football Even in His Sleep, Says Sandesh Jhingan.

‘My passion has no end. Come and practice with me and I will practice with you like I used to do as a 16-year-old. Of course for that, I need to spend extra hours looking at my body, because however hard you may try, we are not getting younger. But you can overcome age making sacrifices at various levels.’ Added the 33-year-old.

‘I intend to carry on until the youngsters come up and push me out. However, there will be a day when my body and mind will tell me that sleep is perhaps more comfortable than going to either the gym, pool or the ground. That day I will get the call from inside that maybe I need to move away. But knowing myself, that day is far away.’ The new Hyderabad FC keeper added.

Subrata Paul has played for over team teams in the country during his career and has been capped 67 times for the Indian national team. Hyderabad will be his fourth club in the Indian Super League, a competition where he has managed a league record 26 clean-sheets.

(The above story first appeared on LatestLY on Jun 26, 2020 02:51 PM IST. For more news and updates on politics, world, sports, entertainment and lifestyle, log on to our website latestly.com).