Top 5 Goals of the Week: From Cristiano Ronaldo vs SPAL to Luis Suarez vs Getafe, Watch Videos of the Best of Football Goals

From English Premier League to Italian Serie A to Spanish La Liga, there were plenty of good goals scored in these leagues and here are our top-5 pick. 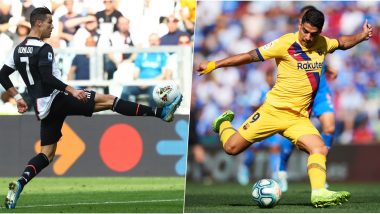 This week in top-flight football across Europe was an intriguing one with plenty of drama on the field. Liverpool needed a narrow 1-0 win to maintain their lead at the top of English Premier League 2019-20 points table. While Pep Guardiola’s Manchester City has found its rhythm back with a pulsating 1-3 away win against Everton. In Spain, Barcelona were victorious while both Real Madrid and Atletico Madrid held each other to a goalless draw in the first Madrid derby of the season. Inter Milan and Juventus secured three points with the former maintaining its 100 % start to the season. There were plenty of good goals scored in these leagues and here are our top-5 pick.

This goal by the Uruguayan striker was special not because of his clam finish but the sheer brilliance of Barcelona goalkeeper Ter Stegen. The German international assisted Suarez with a wonderful long pump down the centre, which the former Liverpool striker easily converted by lobbing over the keeper who was caught in no man’s land.

No. 4 - Gabriel Jesus vs Everton

Manchester City opened their scoring against Everton with a wonderfully taken goal by Gabriel Jesus who started over Sergio Aguero. The goal was once again made by the brilliance of Kevin De Bruyne who whipped in an inch-perfect cross from the right for the Brazilian to score with his head. The curling cross took out the keeper and defender Will Keane.

No. 3 - Cristiano Ronaldo vs SPAL

Cristiano Ronaldo had a pretty frustrating time up against SPAL goalkeeper Etrit Berisha who kept on denying the legendary forward. But when a wonderful cross from Paulo Dybala came in from the wings in the second half, Ronaldo leapt in the air to head the ball down and between the legs of Berisha to give Juventus a comfortable 2-0 lead.

No. 2 - Riyad Mahrez vs Everton

With the game tied at 1-1, Everton conceded a free-kick at the edge of the box which Algerian international Riyad Mahrez dispatched with ease. His left foot strike curled passed the Toffee’s wall, and goalkeeper Jordan Pickford was slow to dive to his right. The goal came at the right moment for Pep Guardiola’s men just when they were growing frustrated with the missed chances.

No. 1 - Miralem Pjanic vs SPAL

Our top goal of the week came in Juventus’ match against SPAL just before the end of the first half. The hosts were poor once again, but Miralem Pjanic volley from just outside his box was the moment of real class. The midfielder hit the ball with a technique very few can match to leave keeper Etrit Berisha with no chance.

These were the top five goals that we witnessed this week. As the football season continues with matches getting tougher with every phase, fans can expect the goals to get better.

(The above story first appeared on LatestLY on Sep 30, 2019 01:34 PM IST. For more news and updates on politics, world, sports, entertainment and lifestyle, log on to our website latestly.com).