Top 5 Goals of the Week: From Virgil van Dijk vs Manchester United to Lionel Messi vs Granada, Here’s the Best of Football Goals 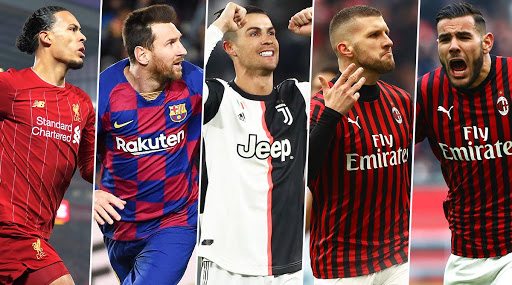 Liverpool opened up a 16 point gap at the top of the English Premier League with a 2-0 win over arch-rivals Manchester United. With Leicester City and Manchester City all dropping points during the weekend, the stage is set for the Reds coronation provided there is not a historical debacle from them. In Italy, Juventus have shifted gears and are now six clear of Inter Milan after a fantastic start to the New Year. The Spanish La Liga will go down to the wire with both Barcelona and Real Madrid going head to toe in the battle for supremacy. Let’s us have our top 5 goals of the week from Europe. Premier League 2019-20 Result: Virgil van Dijk and Mo Salah Goals Take Liverpool To 2-0 Victory Against Manchester United.

Dutch skipper Virgil Van Dijk showed tremendous athleticism and desire to win the header on a Liverpool corner, scoring the Red’s first goal of the match against Manchester United. It calmed the home side’s nerves after the visitors dominated the opening quarter.

Lionel Messi’s goal against Granada proved to be the match-winner in the end but it was more about the exquisite passing of the Catalonians than a flash of individual brilliance. Arturo Vidal’s delicious back-heel found Messi in tiniest of space with the maestro producing a great finish. La Liga 2019-20 Result: Late Lionel Messi Goal Gives Barcelona 1-0 Win Over Granada In Quique Setien's First Match Incharge.

Juventus hitman Cristiano Ronaldo’ first in the game against Parma was a trademark Ronaldo goal with the Portuguese skipper cutting on to his favoured right foot after beating three players. The ball took a huge deflection to find the back of the net but Ronaldo’s move was simply brilliant. Serie A 2019-20 Result: Cristiano Ronaldo Double Helps Juventus To 2-1 Win Over Parma, Go Four Points Clear At Top.

Imagine scoring a last-minute winner for your club after coming on as a half time substitute. Croatian midfielder Ante Rebic did the exact same to bury Udinese with a fine solo effort in the dying moments of the clash.

Former Real Madrid man Theo Hernadez’s world-class volley against Udinese is our goal of the week. The left-back hit the ball with utmost precision after it fell kindly for him from a corner to give Milan the lead in the match.

These were our top strikes of the week and with the top clubs in action in mid-week, expect the goal rush to continue.