Will Cristiano Ronaldo Play Today in Brentford vs Manchester United, Premier League 2022-23? Check Out the Possibility of CR7 Featuring in the EPL Fixture

Manchester United started their Premier League 2022-23 journey under Erik ten Hag. However, the Premier League giants got off to a losing start to the new season after being defeated 1-2 by Brighton last week witch Ronaldo featuring in it. 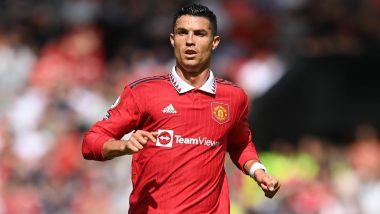 Cristiano Ronaldo's future at Manchester United remains uncertain after the 37-year-old handed in his transfer request. Amid speculations about his future, the Portugal skipper featured in the first Premier League game of Manchester United against Brighton last week in which the Red Devils fell to a 1-2 defeat at home. In the season opener, Ronaldo started from the bench in the second half as Erik Ten Hag believed CR7 was not 'ready' enough to start from the beginning. With many questioning the decision of dropping the Portuguese from the starting line-up, it is highly possible that he would be in the playing XI tonight against Brentford. Cristiano Ronaldo Trains With His Manchester United Teammates Ahead of Brentford Game (See Pics)

Manchester United began their preparations for the new season under Erik ten Hag, who is adamant that he can count on the services of Cristiano Ronaldo. However, the Portuguese, after missing out on whole pre-season tour of the English club due to family reasons, finally joined the Carrington training sessions for the final week before EPL started.

Will Cristiano Ronaldo Play Against Brentford?

Manchester United started their Premier League 2022-23 journey under Erik ten Hag. However, the Premier League giants got off to a losing start to the new season after being defeated 1-2 by Brighton last week. Ronaldo also played for a few minutes in  that game but could not repair the damage which was already done by the away team at Old Trafford. Brentford vs Manchester United, Premier League 2022-23 Free Live Streaming Online & Match Time in India: How To Watch EPL Match Live Telecast on TV & Football Score Updates in IST?

The 37-year-old Portuguese was on the bench in the first half of the Red Devils' season opener as Jadon Sancho, Marcus Rashford and Anthony Martial led the United attack. Ten Hag allowed CR7 to play in the second half and the ace striker produced some good chances only to see his teammates miserably failing to score. The Portuguese star is set to start tonight against Brentford in the Premier League. Manchester United will take on Brentford FC at Gtech Community Stadium.

(The above story first appeared on LatestLY on Aug 13, 2022 08:11 PM IST. For more news and updates on politics, world, sports, entertainment and lifestyle, log on to our website latestly.com).