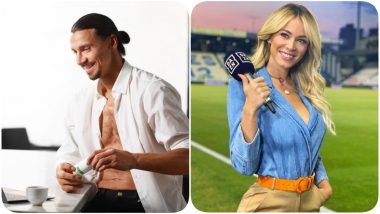 Zlatan Ibrahimovic after his return to AC Milan has already set the tongues wagging with his performance. But it seems that the former Manchester United striker is also making headlines for his life off the field. Ibra was spotted for a dinner date with a popular Italian model and Serie A presenter Diletta Leotta. The two were captured by the shutterbugs in Italy and this set the rumour mills on fire. The two are even featured on Instagram working out together after Ibra and Leotta announced a fitness partnership. Zlatan Ibrahimovic Records One of the Fastest Sprints This Season During Cagliari vs AC Milan Serie A 2019-20 Match, Clocks 32.45 km/h (Watch Video).

What actually caught more attention was that Leotta met Ibra after she spilt with her boxer boyfriend Daniele Scardina. The boxer travelled to Ibiza with his friends to get over the breakup, whereas Diletta Leotta is spending more time with the star footballer. The two have been working out together for the fitness partnership that was announced a couple of weeks ago. Talking about the dinner date, as reported by Chi, the Italian presenter stayed there until 1.30 am.

Though Zlatan is said to be married to Helena Seger, a Swedish blonde and even have a couple of children named Maximilian and Vincent Ibrahimovic. Helena and Zlatan met in 2002 and have been together ever since. They bumped into each other in a car park in Malmö which was s sheer coincidence. Talking about Zlatan’s professional life, his contract with AC Milan is nearing an end.

(The above story first appeared on LatestLY on Jul 24, 2020 10:12 AM IST. For more news and updates on politics, world, sports, entertainment and lifestyle, log on to our website latestly.com).