India picked up seven medals in a day, three of them gold, to surge on top of the standings in the ongoing International Shooting Sport Federation (ISSF) Junior World Cup in Suhl, Germany. 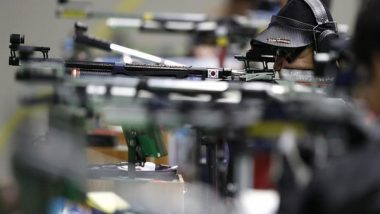 New Delhi, May 12: India picked up seven medals in a day, three of them gold, to surge on top of the standings in the ongoing International Shooting Sport Federation (ISSF) Junior World Cup in Suhl, Germany.

After Rudrankksh Patil and Abhinav Shaw set the ball rolling early on Wednesday morning with a 1-2 in the Men's 10M Air Rifle, it was the turn of the Pistol shooters in the evening, as India registered two more gold-silver finishes in both the individual Men's and Women's 10M Air Pistol competitions. ISSF Junior World Championship 2021: Indian Women’s Junior Skeet Team Beat Italy To Win Gold Medal.

With Rimita also winning silver in the Junior Women's 10M Air Rifle, India's tally at the end stood at three gold and four silver out of the total 12 medals on offer.

Shiva Narwal and Sarabjot Singh began the Indian juniors Pistol dominance, the former prevailing over the latter 16-12 in the final. The duo had never really looked challenged throughout the day, finishing first and third in qualification and again 1-2 at the top eight stage to set up a title clash.

Then it was the turn of Palak and Manu Bhaker to dominate the Junior Women's Pistol. In a deviation from the earlier pattern, while Palak topped qualification, Manu clinched the final and eighth qualifying place with a score of 565 on higher inner 10s. She then topped the top eight stage with a 250.6 to Palak's second place score of 248.1. However, it was to be Palak's day in the end and to her credit she played a confident first big ISSF final for a 17-9 verdict in her favour.

France won the only other gold of the day as reigning junior world champion Oceanne Mueller won the Women's 10M Air Rifle Junior event while hosts Germany, Moldova, Poland and Uzbekistan were the other medal winners on the day.

There are a total of eight more medal days on the schedule and coming up are four more finals on Thursday, all with Indian interests, namely in the Mixed Air events and the Trap shooting competitions.

(The above story first appeared on LatestLY on May 12, 2022 12:19 PM IST. For more news and updates on politics, world, sports, entertainment and lifestyle, log on to our website latestly.com).