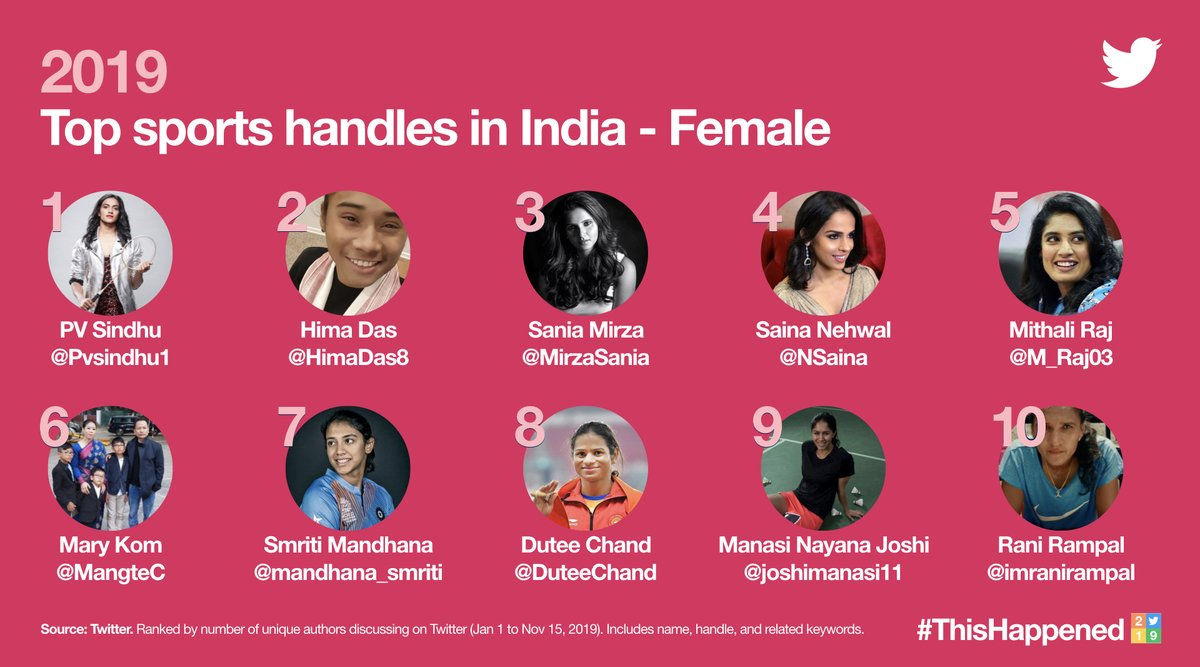 Twitter India has released a list of most tweeted things in 2019 across various categories. This list was released under #ThisHappened 2019. A sportsperson in India, be it male or female has a huge following on various social media sites. Along with following the athletes on the field, they are supported in a great way on different microblogging websites as well. Twitter India released a list of the most tweeted sportswomen in India and here is the list of the female athletes who were talked about the most in 2019. Badminton sensation PV Sindhu leads the list and is followed by Indian sprinter Hima Das. Most Tweeted Handles in Sports 2019 - Male: Virat Kohli, MS Dhoni, Rohit Sharma & Other Top Male Twitter Profiles in India.

The microblogging site released a top 10 list which includes the top tweets, most-discussed hashtags topics and most-discussed accounts in India around different categories such as breaking news, entertainment, politics, social causes, sports and many more. Sportswomen from India had a great 2019 and their achievements were celebrated on social media in a big way. Sania Mirza, the woman who single headedly put Indian women’s tennis on the map is third in the list while former badminton world No.1 Saina Nehwal is fourth followed by Indian cricketer Mithali Raj on fifth. Most Tweeted Handles in Entertainment 2019 Female: Sonakshi Sinha, Anushka Sharma, Lata Mangeshkar.

And these women made it to the top of the athletes list 🏆#ThisHappened2019 pic.twitter.com/i5y1P0HFMF

Another Indian cricketer on the list is Smriti Mandhana who takes the seventh spot on the list. Padma Shri recipient and Indian Boxer Mary Kom is sixth on the list while sprinter Dutee Chand is eighth. Para-Badminton player Manasi Nayani Joshi takes the penultimate slot while field hockey player Rani Rampal completes the list.