Mumbai Indians vs Chennai Super Kings Head-to-Head Record: Ahead of the IPL 2020 Opener, Here Are Results of Last Five MI vs CSK Matches 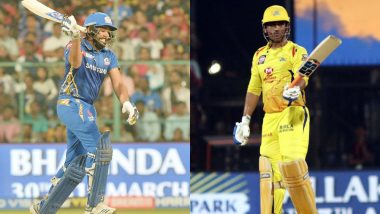 This match was held at the MA Chidambaram Stadium. It was Rohit Sharma's heroic 56 runs that led the team to an eight-wicket victory. Suresh Raina's unbeaten knock of 75 runs went in vain ad Mumbai Indians had the last laugh in the game in IPL 2018.

After losing three games at the start of IPL 2019, Mumbai Indians got back to winning ways as they welcomed the Yellow Army at the Wankhede Stadium. Rohit Sharma's men walked away with a 37 run win as Hardik Pandya and Lasith Malinga scalped three wickets each.

Hosted at the MA Chidambaram Stadium, Mumbai Indians once again crushed the hosts by 46 runs in IPL 2019 second leg of the game. Rohit Sharma once again chipped in with 67 runs and Lasith Malinga once against scalped four wickets.

Mumbai Indians walked away with a six-wicket win in the IPL 2019 eliminator to make way into the finals of the tournament. It was Suryakumar Yadav who walked away with the limelight with his unbeaten knock of 71 runs.

Now, this was one game that truly went down the live wire. Mumbai Indians once again proved their dominance as they won the IPL 2019 trophy after they won by a run.

The IPL 2020 match will begin at 7.30. The game will be held at the Sheikh Al Zayed Stadium in Abu Dhabi and both teams are excited about the upcoming game.

(The above story first appeared on LatestLY on Sep 19, 2020 07:00 AM IST. For more news and updates on politics, world, sports, entertainment and lifestyle, log on to our website latestly.com).