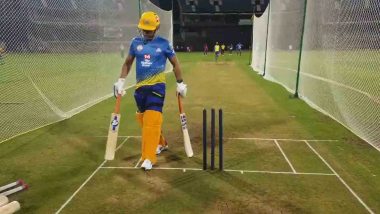 MS Dhoni is all set to return to cricket after quite a long time. Ahead of their game against Mumbai Indians, the official account of the Chennai Super Kings shared an image of MS Dhoni padding up for IPL 2020. MS Dhoni has retired from Indian cricket team on August 15, 2020, when he was in Chennai for a week-long camp hosted by the team before leaving for the IPL. The fans were eager to see him in action. Thus the netizens on social media went berserk and started the trend, #WelcomeBackDhoni. The last time MS Dhoni was seen in action was during the CWC 2019 in England. MS Dhoni played for the Indian team against New Zealand. Mumbai Indians vs Chennai Super Kings, Abu Dhabi Weather, Pitch Report & Rain Forecast: Here’s How Weather Will Behave for MI vs CSK IPL 2020 at Sheikh Zayed Cricket Stadium.

After the World Cup, MS Dhoni remained unavailable for all the international tournaments. It was said that the former Indian captain was eyeing a spot in the T20 World Cup which was supposed to happen this year. But sadly due to the pandemic caused by the coronavirus, the mega-event has been postponed. With this, even MS Dhoni retired on August 15, 2020. However, he remained available to play in the IPL 2020. Thus the fans could not contain their excitement and started posting tweets ahead of the first match. Check out the picture shared by CSK and the tweets by a few tweets below: IPL 2020 Schedule Time Table for PDF Download Online: Full Match Fixtures With Date, Timings in IST and Venue Details of Indian Premier League 13 in UAE.

If you wonder why suddenly everyone is pumped and excited in social media.

If MSD Has A Million Fans,

The World Is Full Of Garbage.

If MSD Has A Thousand Fans,

Garbage In The World is Reducing.

If MSD Has 1 Fan, World is on the verge of Becoming Garbage Free.

If MSD Has No Fan,

Make us Feel happy and proud!#WelcomeBackDhoni

Love and Respect to you always

The first match will be held at the Sheikh al Zayed Stadium in Abu Dhabi. The fans are quite excited with the commencement of the IPL 2020. Mumbai Indians and Chennai Super Kings have been arch-rivals since quite a long time now.

(The above story first appeared on LatestLY on Sep 18, 2020 09:57 PM IST. For more news and updates on politics, world, sports, entertainment and lifestyle, log on to our website latestly.com).