Neeraj Chopra's outstanding performance at Tokyo has made him the national hero. And, after the Haryana-born javelin thrower scripted history in 2020 Games, many Bollywood producers and directors have approached him to make a biopic on his journey. 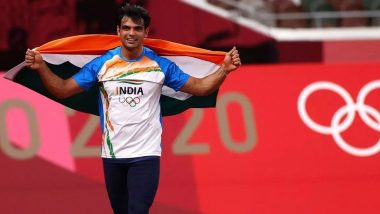 New Delhi, November 11: Tokyo Olympics gold medallist Neeraj Chopra on Thursday said he hasn't thought about Bollywood and his entire focus is on sports and winning medals for the country at the present.

Chopra's outstanding performance at Tokyo has made him the national hero. And, after the Haryana-born javelin thrower scripted history in 2020 Games, many Bollywood producers and directors have approached him to make a biopic on his journey. Neeraj Chopra Thanks Anand Mahindra for Customised XUV700 Javelin Gold Edition Vehicle, Olympics Gold Medalist Flaunts New Set of Wheels! (See Pic).

But, Chopra looks uninterested at the moment and wants to concentrate on sports.

"I have been approached to do biopics but I think what I have achieved is just the beginning. This was my first Olympics. I want to win more medals. I don't want the movie to flop," Chopra said at Times Now Summit 2021. Javelin Thrower Neeraj Chopra Gets Rs 1 Crore Reward from Chennai Super Kings for Tokyo Achievement.

"If I can win more medals, I think then the movie too will be a hit. Right now, my entire focus is on sports, I haven't thought about Bollywood," he added.

Recalling the historic moment, Chopra said: "When I threw the javelin, I wasn't thinking about the medal but was confident that mine was the best throw."

"To be honest, until the last throw you are never sure because there are world champions and Olympic champions at that time. For example, the Czech thrower made a throw of more than 89 metres, so you never know who will make a throw that will exceed that. We need to be focused till the end of the competition," he added.

Talking about his course of training, the golden boy said , "I trained very hard with my coaches and with opportunities to play in international matches, it gave me the exposure and experience to play with international players. This is a huge boost to my confidence in the game. There has been a change in my training as well. I want to achieve the 90-meter distance in future games."

(The above story first appeared on LatestLY on Nov 11, 2021 11:25 PM IST. For more news and updates on politics, world, sports, entertainment and lifestyle, log on to our website latestly.com).