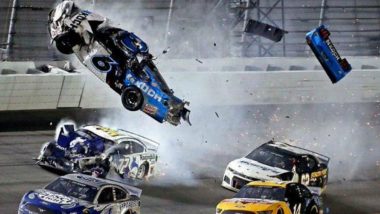 Joe Gibbs Racing driver Hamlin followed up his victory in 2019 with his third career win at Daytona, becoming the first racer to win the opening leg of the NASCAR season since Sterling Marlin in 1995.

The 42-year-old Newman's Ford Mustang had led on the final lap but spun out of control, hit the wall and flipped onto its roof before bursting into flames at the Daytona International Speedway.

realDonaldTrump: RT NASCARONFOX: Here is the final lap of the Daytona 500 in which Ryan Newman's car was flipped at the line.

We will continue to keep you updated on his status as we learn more. pic.twitter.com/u2tTsNTYCU

Newman's car was also sent flying into the air after being struck by Go Fas Racing's Corey LaJoie.

Several ambulances sped onto the circuit to attend to Newman's stricken vehicle following the crash.

Black screens were erected around the site of Newman's car as workers extracted the driver from the wreck.

NASCAR executive vice president Steve O'Donnell later told reporters that Newman was in serious condition at a local area hospital, but his injuries were deemed non-life-threatening.

"He's in a serious condition, but doctors have indicated his injuries are non-life-threatening," a statement from Roush Racing read out by O'Donnell said.

"We appreciate the thoughts and prayers and ask that you respect the privacy of Ryan and his family at this time," O'Donnell added.

Newman's fellow competitors had earlier voiced concern over the plight of the driver following the race.

"I knew it was bad," race-winner Hamlin said. "I knew him crossing the track there was a bad scenario in the first place. It's a weird balance of excitement and happiness for yourself, but obviously someone's health and their family is bigger than any win in any sport.

"We're just hoping for the best."

Hamlin's team boss Joe Gibbs meanwhile apologised for celebrating the win in the immediate aftermath of the chequered flag when Newman's car was still being tended to on the track.

"I was focusing on our car, and everybody started celebrating around us," Gibbs said. "Some people may have saw us and said, 'Well, these guys are celebrating when there's a serious issue going on.'

"So hopefully I apologize to everybody, but we really didn't know. We got in the winner's circle, and then that's when people told us.

"It just makes it so hard. Such a close-knit community."

(The above story first appeared on LatestLY on Feb 18, 2020 10:07 AM IST. For more news and updates on politics, world, sports, entertainment and lifestyle, log on to our website latestly.com).