Caroline Wozniacki was the first Danish professional tennis player to win the Grand Slam tournament and the first-ever woman from a Scandinavian country to become World No 1. She also won the 2017 WTA Finals and finished as runner-up at the 2009 US Open, 2010 WTA Tour Championship and also the 2014 US Open. 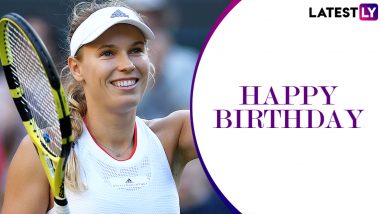 Caroline Wozniacki, former World No 1 and 2018 Australian Open champion celebrates her 30th birthday on July 11, 2020 (Saturday). Wozniacki, who bid adieu to tennis at the end of the Australian Open earlier this year was born on 1990 and enjoyed a stellar 15-year career before calling it quits on January 23 in the year’s first Grand Slam tournament. During the course of her career, since turning pro in 2005, Wozniacki won 30 WTA titles and held the top-ranking status in three different periods. Roger Federer Admits ‘Retirement Getting Closer’ but Still Determined to Play More.

Wozniacki was the first Danish professional tennis player to win the Grand Slam tournament and the first-ever woman from a Scandinavian country to become World No 1. She also won the 2017 WTA Finals and finished as runner-up at the 2009 US Open, 2010 WTA Tour Championship and also the 2014 US Open. Wimbledon to Allocate $12.5 Million Prize Money to 620 Players Despite Cancellation.

She always turned up with her best at the Flushing Meadows and although Wozniacki failed to win the Grand Slam event – she finished runner-up twice – some of her best matches came in New York. As Caroline Wozniacki celebrates her 30th birthday, take a look at some of her best career performances.

Long before she had even made to the maiden appearance at an Australian Open final, Wozniacki could have returned home but for this fearsome fight back against Jana Fett in the second round of the 2018 Australian Open. Having rallied back from a set down to take the match into the decider third set, Wozniacki was behind 1-5 and saved two match points to beat Fett 3-6, 6-2, 7-5 and advance ahead.

Once again, Wozniacki had to come from a set and 1-4 down to beat the former French Open champion Svetlana Kuznetsova 6-7 (6-8), 7-5, 6-1 and advance into the quarter-finals. She had already beaten Kuznetsova at the same stage in 2009 when she had gone on to become the first Danish woman to appear in a Grand Slam final.

Wozniacki, a former World No 1 fought back from the grasp of defeat to beat Angelique Kerber 2-6, 7-6 (7-4), 6-4 and advance to the final. Kerber, a two-time Grand Slam champion, looked the favourite to win after clinching the first set and serving for match point in the second. But the Dane survived and then launched an attack of her own to seal the win after a gruelling two hour and 17-minute clash. It was 600th career win and will also give her career’s 29th WTA title.

Wozniacki stunned fifth seed Maria Sharapova and the New York crowd with a sensational display in a fourth-round 6-4, 2-6, 6-2 win at Flushing Meadows. The victory set her on a first Grand Slam quarter-final appearance since 2012.

After a 15-year stellar career during which she won 30 WTA singles titles, a Grand Slam, WTA Finals, three Mandatory and three Premier 5 titles, Wozniacki announced her decision to retire at the end of 2020 Australian Open where she clinched her first and only tennis major.

Earlier in 2018, she had revealed of getting diagnosed with Rheumatoid Arthritis. Wozniacki later, however, confirmed that her retirement was now due to any health condition but her wish to start a family life with husband and former NBA champion David Lee. Happy Birthday, Caroline Wozniacki!

(The above story first appeared on LatestLY on Jul 11, 2020 08:00 AM IST. For more news and updates on politics, world, sports, entertainment and lifestyle, log on to our website latestly.com).