Pliskova would compete in her maiden semi-final in Wimbledon. She has found some form of late with her performance in the Wimbledon this year. Sabalenka, on the other hand, defeated the in-form Ons Jabeur to book a spot in the semi-final. 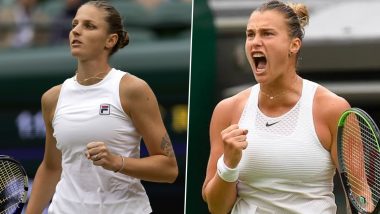 Karolina Pliskova would take on Belarusian second seed Aryna Sabalenka in the women's singles semi-final on Thursday, July 8. The match would be played at the Centre Court and is slated to begin at 07:15 PM IST (Indian Standard Time). Sabalenka has proven her detractors wrong with a solid performance in the competition so far as she, for the first time entered the semi-finals of a major, with a fourth-place finish being her best so far. Sabalenka had got the better of Arabian Ons Jabeur 6-4, 6-3 to book a spot in the semi-final. Hubert Hurkacz Knocks Roger Federer Out of Wimbledon 2021, Advances to his First Grand Slam Semi-Final

Pliskova also would compete in her maiden semi-final in Wimbledon. She has found some form of late with her performance in the Wimbledon this year. She is yet to lose a set in five matches and she would have to be at her absolute best to defeat Sabalenka and earn a spot in the final.

Karolina Pliskova v Aryna Sabalenka match in Wimbledon 2021 will take place on July 08, 2021 (Thursday). The match will be played on Centre Court and has a tentative start time of 07:15 pm IST (Indian Standard Time).

(The above story first appeared on LatestLY on Jul 08, 2021 05:26 PM IST. For more news and updates on politics, world, sports, entertainment and lifestyle, log on to our website latestly.com).