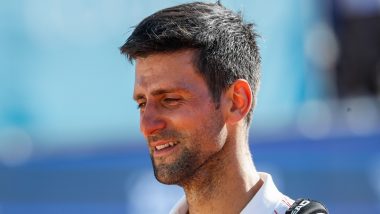 Novak Djokovic has come under heavy criticism for organising the exhibition tennis tour in which several players tested positive for the coronavirus. Although the men’s World No 1 has apologised for his actions and prayed for the swift recovery of all those that were infected by the virus, things seem to have taken an ugly turn with the tennis player now receiving death threats. A graffiti asking for the Serbian to die was painted on a wall in Croatia. That was in addition to the vile and backlash he has receiving online since confirming that he had contracted the virus. ITF Official Slams Novak Djokovic’s Father for Blaming Grigor Dimitrov After Coronavirus Outbreak at Adria Tour.

The charity tennis event, Adria Tour, organised by Djokovic was called off last week after the tournament turned into a COVID-hotspot. players flouted social distancing rules, played in packed stadiums and partied. Apart from the 17-time Grand Slam champion his wife Jelena, coach Goran Ivanisevic and other players like Grigor Dimitrov, Borna Coric and Viktor Troicki were all infected with the virus. Nick Kyrgios Takes a Dig at Novak Djokovic After Serbian’s Tennis Coach Tests Positive for Coronavirus.

The tournament, which was played in Zadar, Croatia and in Djokovic’s training complex in Serbia saw players participating without any quarantine, shoddy social-distancing guidelines, packed stadiums, player hugging each other and posing for pictures with the fans. Moreover, a video of the players partying with their partners also went viral on social media causing a rage.

Djokovic has since apologised for hosting the tournament under heavy criticism from his peers and said: “I am extremely sorry for each individual case of infection. I hope that it will not complicate anyone’s health situation and that everyone will be fine.” That has, however, done little to stop the outrage and he continues to receive backlash for his actions.

Recently, a graffiti message was seen on the street walls of Croatian city Split – only around 90 minutes far from Zadar where the tournament was hosted – asking for the Serb to die. “Djokovic, die. Our wish is that you die. Greetings from Split. Die,” the message read.

Meanwhile, amid the chaos calls have also been made for the top-ranked tennis player to step down as president of the ATP Players Council. “There are 10 people on the council; they should figure how they feel about it,” Paul Annacone, former coach of Roger Federer, told Sports Illustrated. “You have 500 players around the world on razor’s edge, hoping they can play in eight weeks (at the US Open). Every action has a consequence. I think there’s a lot of his peer group who are scratching their heads,” he added.

Meanwhile, players continue to attract criticism and controversy for their actions. A video emerged on Monday where Alexander Zevrev was seen partying at a private club in Monte Carlo when he was supposed to be in quarantine after returning from the Adria tour last week.

(The above story first appeared on LatestLY on Jun 30, 2020 09:23 AM IST. For more news and updates on politics, world, sports, entertainment and lifestyle, log on to our website latestly.com).