PETA and Amul were involved in a clash earlier this year as well. This time, their bone of contention is Amul's ad featuring Serbian tennis star Novak Djokovic, who recently won his 19th Grand Slam title. 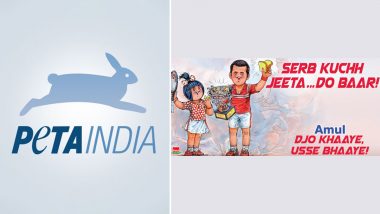 Popular animal rights organisation People for the Ethical Treatment of Animals or PETA has engaged with a fresh conflict with dairy brand Amul, this time on an advertisement including none that tennis star Novak Djokovic. PETA on Tuesday, sent a letter to Amul, asking them to take down the advertisement, where they have congratulated Djokovic after winning the French Open. The Serbian star recently won his 19th Grand Slam by clinching the French Open 2021 title. PETA argued that the ad Amul came up with, was 'misleading' as Djokovic doesn't consume dairy or dairy products. Amul Congratulates Novak Djokovic After Serbian Wins French Open 2021 Title (See Post)

Amul's ad featured Djokovic with the text, " “serb kuch jeeta.....do baar”.It also stated, "Amul Djo khaaye, usse bhaaye," which signalled the fact that Djokovic ate milk products. Explaining as to why they considered the ad to be deceptive, PETA CEO Dr Manilal Valliyate said, "Djokovic is a vegan who won his 19th Grand Slam, and now, PETA India slams Amul for appropriating his image in an ad for the very product he denounces."

This wasn't the first time however that both these organisations have taken on each other. Last year, they had criticised Amul's ad on Oscar-winning actor Joaquin Phoenix. Phoenix, in his speech after receiving the award, had talked about the significance of animal rights.

The clash between Amul and PETA goes way back to March this year when Amul had published advertisements stating the differences between milk and plant-based products. The ads sent out the message that fact that "milk is a complete food, natural as well as vegetarian."

Amul's case was supported by the Advertising Standards Council of India or the ASCI, which said that "there is sufficient scientific data to prove that milk is nutritious and a rich source of calcium, vitamins, carbohydrates, fat, minerals and protein.” PETA subsequently was unhappy with the verdict and wrote to Amul in May, asking them to start making vegan products.

(The above story first appeared on LatestLY on Jun 22, 2021 09:20 PM IST. For more news and updates on politics, world, sports, entertainment and lifestyle, log on to our website latestly.com).