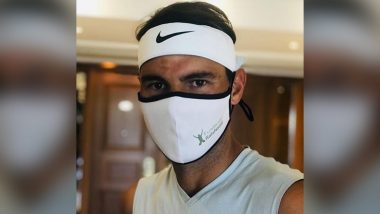 Rafael Nadal will back in action for the first time since the Mexico Open in February. The 19-time Grand Slam champion skipped the Cincinnati Masters and US Open 2020 citing safety reasons and will be making his tennis return for the first time in six months. Nadal will face US Open semi-finalists Pablo Carreno Busta in the round of 32 in Italian Open which will mark his return to tennis after a gap of six months due to the COVID-19 pandemic. Nadal shared a picture of himself wearing a mask as he waited for the organisers to announce the match timings. Serena Williams Withdraws From Italian Open 2020 With Achilles Injury.

Nadal shared a picture wearing the mask made by his own tennis foundation and said he was waiting to know about the timing of his match. “Waiting to know the time of my match tomorrow...” the Spaniard captioned the picture. Nadal is the two-time defending champion of Italian Open. He beat World No 1 and rival Novak Djokovic in the final last year to win the Italian Open. French Open 2020: Andy Murray Given Wild Card Entry for Roland Garros.

The Spaniard, however, was informed about the match timing later and he took to social media to reveal that the match timing has been announced. “I have just been told... tomorrow 7pm CET (Rome). Very much looking forward to it,” he wrote on Twitter. Rafael Nadal vs Pablo Carreno Busta round of 32 match in Italian Open 2020 will be played at 10:30 pm on September 16, 2020 (Wednesday).

I have just been told... tomorrow 7pm CET (Rome). Very much looking forward to it. #vamos 👏🏻💪🏻🎾🇮🇹 #forza pic.twitter.com/wQ9waNathl

(The above story first appeared on LatestLY on Sep 15, 2020 10:04 PM IST. For more news and updates on politics, world, sports, entertainment and lifestyle, log on to our website latestly.com).