Spain's Paula Badosa is the new world No.2 women's singles tennis player -- a new career-high -- in the latest WTA Rankings, after the 24 year-old advanced to the semifinals in Stuttgart last week. 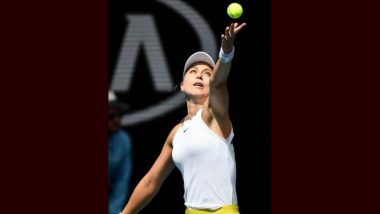 New York, April 26: Spain's Paula Badosa is the new world No.2 women's singles tennis player -- a new career-high -- in the latest WTA Rankings, after the 24 year-old advanced to the semifinals in Stuttgart last week. Badosa became the fourth Spanish woman to be ranked among the WTA tour's top-2 joining Conchita Martinez, Garbine Muguruza and Arantxa Sanchez Vicario. She currently holds the No.2 spot with 5,045 points, only two points ahead of No.3 Barbora Krejcikova of the Czech Republic at 5,043. Iga Swiatek Defeats Aryna Sabalenka To Clinch Stuttgart Open 2022 Title.

Meanwhile, 20-year-old Iga Swiatek of Poland once again stole the headlines with her run to the title in Stuttgart, cementing her lead at the top. The world No. 1 won her fourth consecutive title and extended her lead in the rankings to 2,136 points. British teenager and winner of the 2021 US Open, Emma Raducanu of Great Britain, in her first career main-draw clay-court appearance, advanced to the quarterfinals in Stuttgart and earned 100 ranking points. This week, she takes one step closer to making her top-10 debut, moving from No.12 to No.11, a new career-high. The other top-100 players reaching a career-high this week included Liudmila Samsonova of Russia, a semifinalist in Stuttgart. She jumped five spots from No.31 to No.26 as she reached her second career clay-court semifinal.

(The above story first appeared on LatestLY on Apr 26, 2022 03:18 PM IST. For more news and updates on politics, world, sports, entertainment and lifestyle, log on to our website latestly.com).