Phogat, who is scheduled to take on Cambodia’s Nou Srey Pov at ONE: INSIDE THE MATRIX on October 30 (Singapore), had earlier said that she has been watching videos of the talismanic MMA fighter since 2013 and is highly motivated by him. 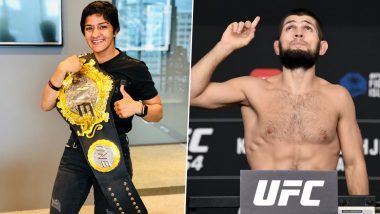 Indian MMA sensation Ritu Phogat has backed Khabib Nurmagomedov to beat Justin Gaethje in the much-anticipated UFC 254 at the Flash Forum Arena in Yas Island, Abu Dhabi on October 24, 2020 (Saturday). Defending the undisputed UFC lightweight title, Khabib, who is undefeated in his MMA career with a dominant record of 28-0, will enter the octagon as favourite to clinch the encounter. Phogat is also quite confident about the Tiger’s triumph, and that is evident in his latest Twitter post. The 26-year-old star shared Khabib’s picture with the caption: “No one can beat @TeamKhabib.” Khabib Nurmagomedov vs Justin Gaethje Preview: Undisputed Lightweight Championship on the Line At UFC 254.

Phogat, who is set to take on Cambodia’s Nou Srey Pov at ONE: INSIDE THE MATRIX on October 30 (Singapore), had earlier said that she has been watching videos of the talismanic MMA fighter since 2013 and is highly motivated by him. How to Watch Khabib Nurmagomedov vs Justin Gaethje Live Streaming Online in India?

“I have been very motivated by him and I watch a lot of his videos. I started following Khabib in 2013 and I am inspired by him. His control on the ground is immense, and I keep watching his videos to learn and improve my own game. I aspire to be like him some day,” Phogat said in a recent interaction with Sportskeeda. Meanwhile, let’s look at how the Indian MMA star showcased her support for the defending champion. Virat Kohli's Never Giving Up Attitude Inspires Me, Says India's MMA Fighter Ritu Phogat.

No one can beat @TeamKhabib 🦅 pic.twitter.com/NBmkyBB9yz

Meanwhile, retaining the title in front of Justin Gaethje will not be a cakewalk for Khabib.  Hailed at the ‘The Highlight,’ the American is regarded as the most violent man in the UFC with a 100 per cent finish rate in the UFC.

(The above story first appeared on LatestLY on Oct 24, 2020 10:49 PM IST. For more news and updates on politics, world, sports, entertainment and lifestyle, log on to our website latestly.com).