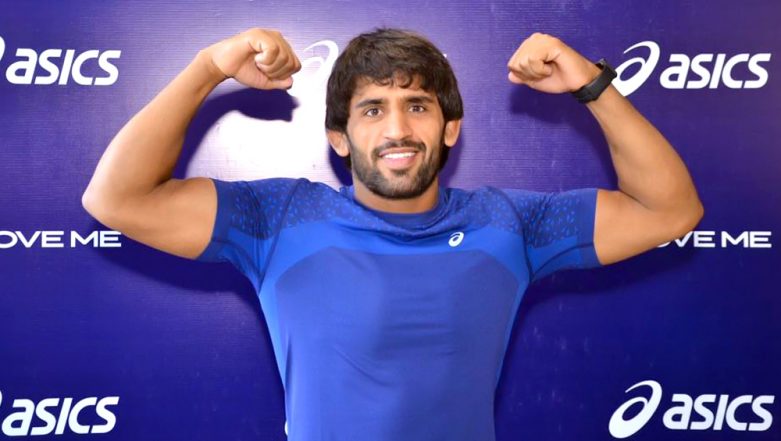 New Delhi, Aug 16: Ace wrestler Bajrang Punia is set to be awarded the Rajiv Gandhi Khel Ratna Award 2019 -- the country's highest sporting honour. Speaking to IANS, sources in the know of developments said that Punia will be rewarded with the award for his consistent showing in the field of wrestling and his contribution in bringing laurels to the country. Punia along with Vinesh Phogat were recommended by the Wrestling Federation of India (WFI) for the prestigious award. Bajrang Punia Wins Gold Medal in 65kg Freestyle at Tbilisi Grand Prix 2019 Wrestling in Georgia.

Punia recently defended his title at the Tbilisi Grand Prix as he won the gold medal by prevailing over Iran's Peiman Bibyani in the 65kg final of the men's freestyle competition. Current number one wrestler Punia stamped his authority in the Asian circuit after he won the Asian Wrestling Championships in Xi'an, China. Punia had last year won the gold medal in the 65-kg freestyle wrestling event at the Asian Games held in Jakarta. He defeated Japanese wrestler Takatani Daichi 11-8. Bajrang Punia to Tie Knot With Sangeeta Phogat After Tokyo Olympics 2020.

Before that, he had also won the gold medal in the same category at the Gold Coast Commonwealth Games. He overcame Kane Charig of Wales by Technical Superiority to clinch the gold. Last year, Indian cricket team skipper Virat Kohli and weightlifter Mirabai Chanu were awarded the Khel Ratna Award. The first recipient of the award was Chess Grandmaster Viswanathan Anand, who was honoured for his performance in the year 1991-92.