WWE Money in the Bank (MITB) Pay Per View (PPV) is the first main event after WrestleMania 35. 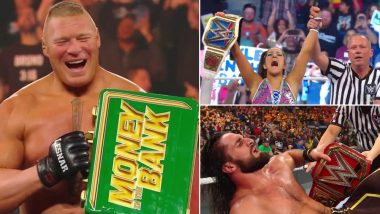 World Wrestling Entertainment (WWE) Money in the Bank (MITB) Pay Per View (PPV) is the first main event after WrestleMania 35. The actions and results from MITB 2019 created the storyline for the coming year in WWE. We saw Bayley as the new WWE SmackDown Women's champion, while Brock Lesnar won the Money in the Bank Ladder match. Ahead of WWE Money in the Bank 2019 PPV Where Roman Reigns Will Face Elias, ‘The Big Dog’ Gets Nominated in MTV Award for Best Real Life Hero (View Pic and Videos)

Bayley after winning Women's Money in the Bank ladder match cashed it against Charlotte Flair, as 'The Queen' defeated Becky Lynch for SmackDown Women's title with aid from Lacey Evans. It was indeed a historic moment for Bayley as she became the new SmackDown Women's champion. The Beast Incarnate Brock Lesnar made a return on MITB 2019 to win the Money in the Bank Ladder match, which means Seth Rollins Universal title will be in danger. WWE Star Ashley Massaro Passes Away at 39; Five Lesser-Known Facts About Former SmackDown Wrestler.

Watch Andrade giving Powerbomb to Finn Balor from the Ladder

"SUNSET FLIP THROUGH THE LADDER!!! ARE YOU KIDDING ME?!?!" #MITB @AndradeCienWWE @FinnBalor pic.twitter.com/9znDhpGZWB

Balor Getting Some Beating From Baron Corbin

THE NEW DAY PARTY is ON as @TrueKofi and @XavierWoodsPhD celebrate at #MITB! #WWEChampionship pic.twitter.com/YihBW0wPGO

The #UniversalChampion @WWERollins is throwing everything he has at @AJStylesOrg as the pace continues to quicken at #MITB! pic.twitter.com/SmBIIoLq26

The reason why AJ Styles is Phenomenal

Styles brought his A game, however, Rollins survives

Watch Seth Rollins speak after his victory over Styles

EXCLUSIVE: @AJStylesOrg may have brought his 'A' game... But @WWERollins brought his 'A+' game at #MITB! pic.twitter.com/bVVq1KJGfp

You can't keep the #BigDog down for long! @WWERomanReigns just showed @IAmEliasWWE whose yard it is! #MITB pic.twitter.com/rKuIzBoZwO

Roman Reigns indeed is the king of his yard!!!

Becky Lynch won the Raw Women's Championship belt against Lacey Evans, however, she loses her SmackDown Title to Charlotte Flair

The Queen and Lacey Evans attacked The Man!!!

The Queen celebration did not last long!!!

Bayley spoils her party to cash in her Money in the Bank to become the new SmackDown Women's Champion.

MS. #MITB @itsBayleyWWE is HERE to even the odds for @BeckyLynchWWE! pic.twitter.com/YnvcrtrWq0

Miz regrets his loss and blames himself for the defeat

Some action from The Miz vs Shane McMahon

(The above story first appeared on LatestLY on May 20, 2019 11:11 AM IST. For more news and updates on politics, world, sports, entertainment and lifestyle, log on to our website latestly.com).