Amazon Prime Video is trying to make the most of Netflix's Streamfest craze by taking a dig at its rival. It released a video that made fun of its two-day streaming fest. 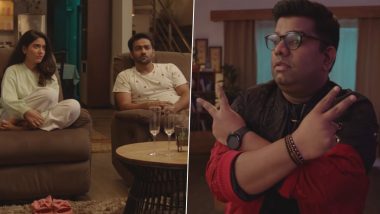 While Netflix India navigates ways to fix the 'Streaming At Capacity' messages on their platforms during the ongoing StreamFest, Amazon Prime Video is busy taking a dig at the entire exercise by its rival. It shared a video captioning it as No fest Just Facts which has a couple saying Prime has a 30-day free trial anyway. It takes a direct dig at the hullaballoo Netflix has been creating about its two-day free streaming offer. Netflix StreamFest Funny Memes & Jokes: Netizens Have No Chill! Hilarious Reactions Take Over the Internet As Non-Subscribers Browse the App to Binge-Watch Shows for Free

The video has a guy planning what all he will do in these two days while watching shows on the platform while a couple goes all 'Big deal' on him. We love this one-upmanship these brands get into which means it's our gain. Check out the video here...

A post shared by amazon prime video IN (@primevideoin)

The Amazon Prime Video vs Netflix war makes for great content on social media. Netflix has been promoting its streamfest for days now and two days when it began, the platform has already hit a problem. But not in a mood to lose out on potential new subscribers, those who are getting the error messages might get two days extra streaming free,

(The above story first appeared on LatestLY on Dec 05, 2020 02:36 PM IST. For more news and updates on politics, world, sports, entertainment and lifestyle, log on to our website latestly.com).