Facebook on Monday made its Cloud gaming service official, with launching several new games in the main app and on browser for Android and on the web but ditched Apple, saying its Cloud gaming path on the iOS devices is uncertain. 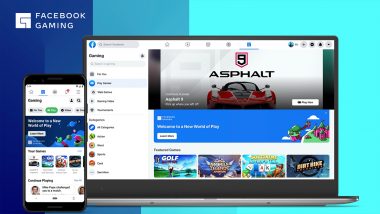 San Francisco: Facebook on Monday made its Cloud gaming service official, with launching several new games in the main app and on browser for Android and on the web but ditched Apple, saying its Cloud gaming path on the iOS devices is uncertain. Apple restricted Facebook Gaming to arrive on iOS several times and the social network's Chief Operating Officer Sheryl Sandberg admitted recently that Facebook managed to launch an iOS version of its gaming app after it was "forced to make a concession to bring it to the App Store". Facebook said that they are excited to launch the beta for cloud-streamed games on Facebook Gaming, starting with a range of mobile-native games in Android. Facebook Prepares Emergency Measures to Regulate Content During US Presidential Election 2020.

"Unfortunately, we're not launching cloud games on iOS, so only Android and web players will enjoy integrated cloud games on Facebook while we work on alternative options for iOS," said Jason Rubin, VP of Play, Facebook. "Even with Apple's new cloud games policy, we don't know if launching on the App Store is a viable path," he said, adding that there are limitations to what Facebook can offer on Safari. "While our iOS path is uncertain, one thing is clear. Apple treats games differently and continues to exert control over a very precious resource," Rubin said.

Sandberg said in August: "We're staying focused on building communities for the more than 380 million people who play games on Facebook every month whether Apple allows it in a standalone app or not".

Facebook informed that it recently had 200,000 people playing its cloud-streamed games per week in limited regions.

"We're not spinning off a separate cloud gaming service. All cloud-streamed games are playable in the same way you play games now on Facebook - whether it's in our Gaming tab or from News Feed," the company informed. "No special hardware or controllers needed -- your hands are the controllers since we're launching with native mobile games". "In the coming weeks we'll add Dirt Bike Unchained by Red Bull," Facebook said.

People can play these games with a mouse and keyboard on desktop. The first set of games available this week include Asphalt 9: Legends by Gameloft; Mobile Legends: Adventure by Moonton; PGA TOUR Golf Shootout by Concrete Software, Inc.; Solitaire: Arthur's Tale by Qublix Games; and WWE SuperCard by 2K Games.

(The above story first appeared on LatestLY on Oct 27, 2020 09:12 AM IST. For more news and updates on politics, world, sports, entertainment and lifestyle, log on to our website latestly.com).