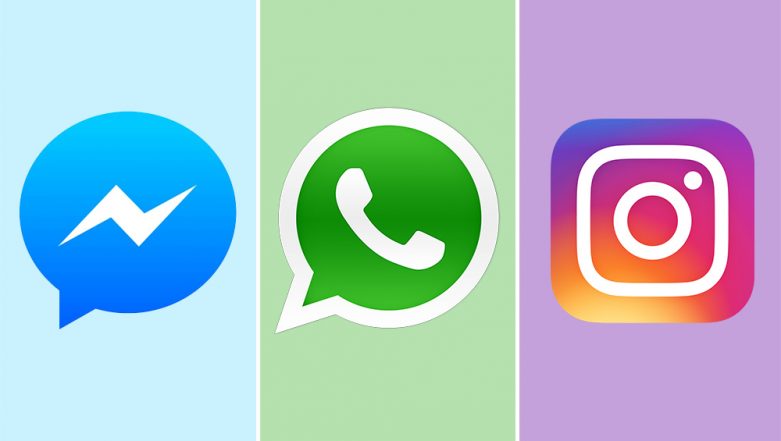 San Francisco, Jan 31: Amid the global outrage over Facebook's plans to integrate chats among Whatsapp, Messenger and Instagram, the company's CEO Mark Zuckerberg has said this is going to be a long-term project. In an earnings call after announcing Facebook's fourth quarter results late Wednesday, Zuckerberg said they were early in thinking through the integration plan. He said more than the commercial benefits of the chat integration between the apps, he was concerned about data encryption. Facebook Reportedly Paid Teenagers $20 Each Month For Selling Their Privacy on Android & iPhones By Installing Data Harvesting VPN App.

"There's a lot more that we need to figure out before we finalize the plans. This is going to be a long-term project that I think will probably be to whatever extent we end up doing it in - a 2020 thing or beyond," said the Facebook CEO.

"The first reason that I'm excited about this is moving more to end-to-end encryption by default in more of our products. People really like this in WhatsApp. I think it's the direction that we should be going in with more things in the future," he told analysts.

"There are also a number of cases that we see where people tell us that they want to be able to message across the different services," Zuckerberg noted.

The Irish Data Protection Commission (DPC) on Monday warned Facebook over its planned integration of chat services -- WhatsApp, Messenger and photo-sharing app Instagram -- asking the social media giant to provide it with an "urgent briefing" on the proposals.

"The Irish DPC will be very closely scrutinizing Facebook's plans as they develop, particularly insofar as they involve the sharing and merging of personal data between different Facebook companies," DPC said in a statement.

According to Zuckerberg, the idea is to let people utilise the apps to enhance the experience.

"We need to make it so that people can communicate across the different networks and graphs that they have or be able to do that integration better in order to facilitate more transactions and connections there," said Zuckerberg.

He said he believes very strongly in trying to decentralize and put power in individual's hands. "One of the ways that we're talking about decentralization is through end-to-end encryption in messaging," he added.