Koo Launches Voluntary Self-Verification for All Users to Drive Authenticity

Koo informed that voluntary self-verification will be granted in the form of a green tick on a user's profile. Any user can now self-verify their profile on Koo platform, within few seconds by using their government-approved ID card. 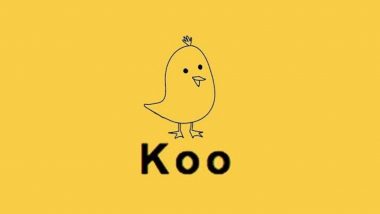 New Delhi, April 6: Twitter-rival Koo on Wednesday launched voluntary self-verification for all users, and said the move will empower users to establish authenticity of their accounts on the platform, lending credibility to thoughts and opinions shared by them.

With this, Koo said it has become the first 'Significant Social Media Intermediary' to offer this feature in accordance with new IT rules, 2021.

The voluntary self-verification for all users goes far beyond the current industry practice of verification of important or VIP accounts, it said.

Koo informed that voluntary self-verification will be granted in the form of a green tick on a user's profile. Any user can now self-verify their profile on Koo platform, within few seconds by using their government-approved ID card. How To Apply for Yellow Tick of Eminence on Koo? Know Process and Eligibility To Apply for Verification on the Indian Social Networking App.

Voluntary self-verification promotes visibility of genuine voices, the company asserted. A visible marker in the form of a green tick will identify an account as being self-verified.

Mayank Bidawatka, co-founder of Koo said that the "landmark" feature will make internet better and safe, and celebrates authenticity. Not only large platforms but many other internet sites would want to replicate the move, he felt.

Asked about his views on Twitter working on edit button for tweets, Bidawatka said he did not understand the big buzz around it. "It has been 20 months since we had this feature," he quipped.

Elaborating on the process of self-verification, Koo said that users can enter the government-identification number, fill the OTP, and on successful authentication, get self-verified with a green tick in their profile. The whole process is completed within a few seconds. The validation process is carried out by government-authorised third-parties, and Koo made it clear that it would not store any information during the process.

In addition to empowering users on the platform, voluntary self verification - by promoting authenticity - is expected to curb the online menance of misinformation, hate speech, abuse and bullying.

In its FAQs on the new feature, Koo said the details on the profile of the user remains as it used to be, before the verification. On whether the ID card details show up on Koo after authentication, the platform said: "No. ID details are only used to authenticate the veracity of the user."

In mid last year, the homegrown social media platform had announced the addition of the 'Eminence Yellow Tick', which signifies prominent users from the world of arts, sports, business and politics. Koo's yellow tick for verified users called 'Eminence', recognises and showcases distinction in Indian life. The feature announced on Wednesday would make self-verification available to all users. Koo App, Twitter’s Indian Alternative Raises $30 Billion in Series B Funding Led by Tiger Global.

Founded by Radhakrishna and Mayank Bidawatka, Koo was launched in March 2020 to allow users to express themselves and engage on the platform in Indian languages. It supports multiple languages, including Hindi, Telugu and Bengali, among others. Koo's popularity in India peaked amid the Indian government's spat with Twitter and growing calls for expanding the ecosystem of homegrown digital platforms.

In the months that followed, Koo saw a massive spurt in its user base and Union ministers and government departments in India have endorsed the homegrown microblogging platform. Koo currently has 30 million downloads.